Courtesy of friend Aaron Harvey, we have this bit of 1970s Star Trek merchandising goodness.

I have to admit – and this is something I get to say with decreasing frequency as the years go by – but I’d never even heard of this particular item let alone seen one before yesterday. It’s totally insane and yet has everything I love about that early era of Star Trek merch.

First, there’s the obvious “label slapping,” whereby the toy manufacturer just adds the name of a popular TV show, movie, comic book, or whatever onto something that evokes the tagged property in no meaningful way whatsoever. But then there’s the groovy box art that really makes this worthwhile. I admit I like it way more than the actual “Phaser Rocket Gun.” I’d actually rather collect just the box over the toy itself.

This gem was produced in the UK and likely never made it over here to the States in any signficant numbers, making it a definite rarity and item of curiosity for many a hardcore Star Trek collector. There was one other toy from “Lone Star” that I did know about: their “Inter-Space Communicator” which as you can plainly see bears absolutely no resemblance to anything you might’ve seen Kirk or Spock talking into on the original series.

I didn’t do a particularly deep dive on this, and so only found these two examples of Star Trek merch from Lone Star, which I’ve decided had to be the British successor to our very own and very much beloved Remco from the late 1960s while the original show was still in production. You know what I’m talking about…..

For anyone interested along with any of you who keep insisting I’m hard to shop for, as I write this there’s currently an eBay auction for the “Phaser Rocket Gun,” with an opening bid of $350. So, so you know….bid early and often!

What’s wrong with this picture, amirite?

The above panel is from Passage to Moauv, a Star Trek tale written in 1975 for Power Records, which at the time was producing stories tying into various comic book characters and other entertainment properties. The stories were originally developed for vinyl records (latter cassette tapes) and this was one of three such tales originally issued on a larger 33-rpm LP record. The story itself has the disinction of being written by notable science fiction author and all-around media tie-in king Alan Dean Foster, who also wrote the accompanying stories, In Vito Veritas and The Crier In Emptiness.

Later in 1975, the story was re-issued on its own smaller 45-rpm record, this time accompanied by a comic-like adaptation of the script drawn by artist Russ Heath and inked/colored by Dick Giordano & Neal Adams (yes, you read those names right. THAT Dick Giordano and THAT Neal Adams), along with a cover by Adams. Of course, it’s with the comics companion that they got themselves intro trouble. I mean…..

1970s Star Trek merch. Sometimes, you just have to roll with it.

Celebrating the 66th anniversary of the invention of time travel….

Oh, and he’s also a role model. Just ask him.

Of course, all he wants is to sit in the sun and read his book. Alone. Afterward? He really hasn’t thought that far ahead.

So, hey! Don’t just have a great Captain Picard Day. Get out there and “Make It So.”

We shall all sing songs of the Great Turkey Leg, on our way to the Stove O’ Kor.

Happy Thanksgiving, everyone. Here’s hoping you enjoy a restful holiday while being mindful of the current challenges we all face and looking out for our family, friends, and just random people you may encounter during this time. For those unable to do so – servicemembers, first responders, doctors and nurses, and lots of other fine people answering a higher calling or simply having to work a job that precludes them from taking the day off – this year more than any other in recent memory we thank you for your service and commitments and wish you a safe return home. And let’s not forget those who for whatever reason might be alone today, or who might need a helping hand.

To boldly Peep where no one has Peeped before!

Yeah. That sounded less creepy in my head. 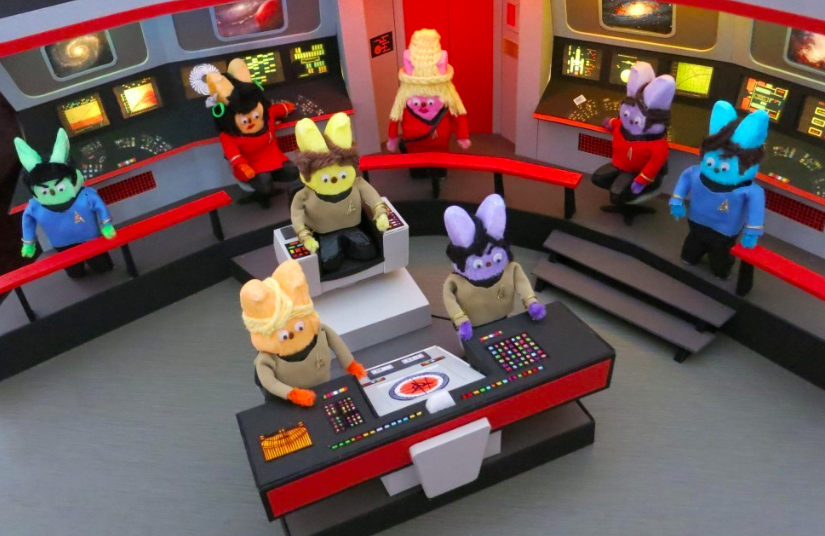 After the century that was March, here we are at April. 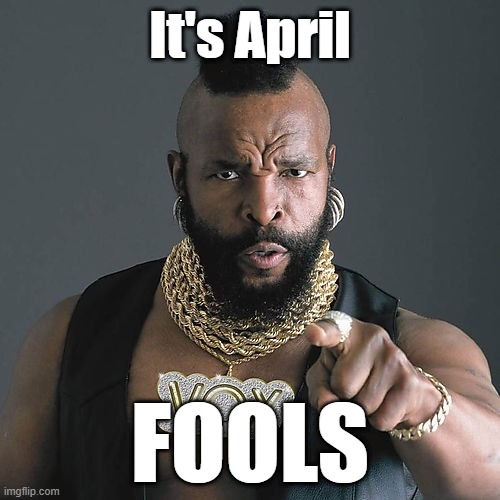 I wish I could proclaim “April Fools!” and the first quarter of 2020 has been nothing more than some sick joke perpetrated by that one asshole in your office, but alas…it just ain’t so. It’s all real, and we’re still stuck with it.

I hope as you read this you and your friends and loved ones are taking care of yourselves and weathering the situation as best as you’re able. If you or someone you know is what we now call “essential personnel” during these trying times, I wish them well and that they remain healthy and safe.

We here at Ward Manor are fine. The kids are doing virtual learning for school, and my daily work routine hasn’t changed much at all. The big difference is, of course, on what you can and can’t do outside the home, and the varying degrees of challenges one encounters when shopping for household needs. We’re doing our best to remain in place as much as possible, venturing into the world for groceries and takeout from various local eateries we’re doing our best to support. The weather’s warm enough I can at least work in the yard, take walks, and so on.

As for “April Fools Day,” my big reason for abstaining this time around is that I simply wasn’t able to come up with something that fit the criteria I try to follow when conjuring such things. I don’t tend to go for pranks that are mean or hurtful, or target people or try to humiliate them in some way. I just like goofy things that elicit a chuckle or the occasional belly laugh if I can manage it. The gag products the team at ThinkGeek used to concoct are prime examples of the sort of April 1st shenanigans I prefer.

One year, I decided to write my first-ever review for a Star Trek fan film.

And, of course, who could forget the time Kevin and I decided we were going to write a Star Trek rock-n-roll musical. 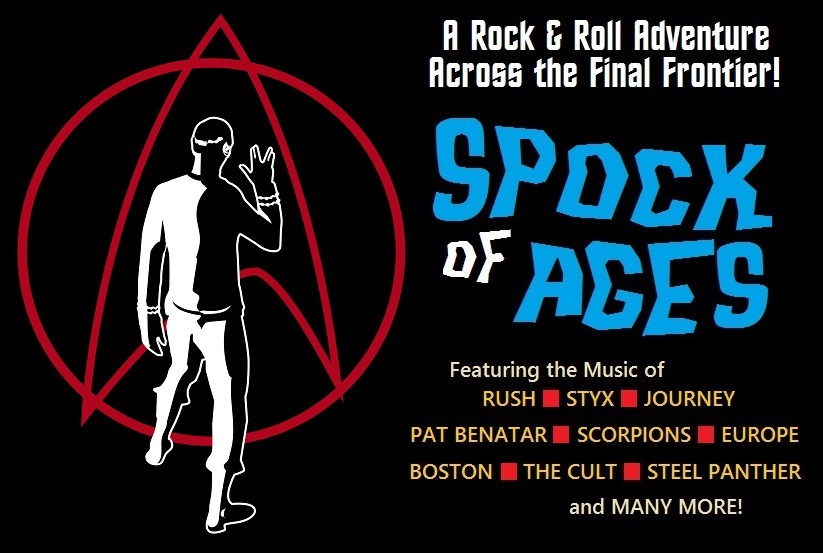 One year, Kevin and I broke up. Yes, I wrote this piece and convinced StarTrek.com to run it. Don’t worry, though; we got back together. 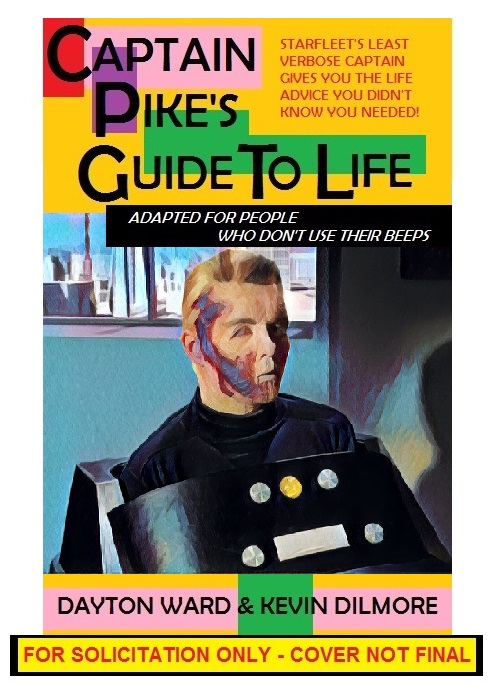 My favorite gags usually involve coming up with nutso book ideas. If we’re being honest, there’s a lot of inherent humor to be found within Star Trek. Long time fans know it has its own set of tropes, good and bad, which can be mined for laughs. The key for me is remembering to laugh with these things, not at them.

I went a bit overboard one year, when I pitched “The Quotable Captain Pike.” When I came up with the idea (which I revised with a snappy new cover last year…eyes left), our view of the good captain was dominated by how he was portrayed in the original series episode “The Menagerie.” Since then we’ve had Anson Mount’s top-shelf portrayal of Pike before the character’s tragic fate befalls him. 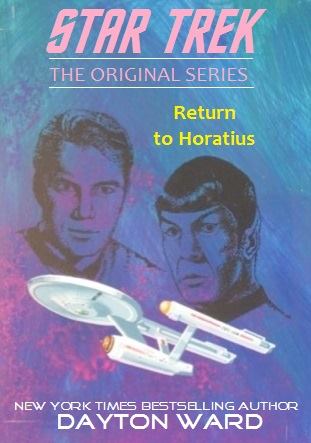 Other cover ideas were far more simple and cheesy. Last year, along with the Pike cover I also threw out one for Return to Horatius, my proposed sequel to the very first Star Trek novel ever written and which was published way back in 1968. That was just something I did on the spur of the moment and it shows, but it was enough to get a few giggles from my friends on Facebook, which is all I really wanted.

My favorite of these, though, was the one I could not have done without the artistic awesomeness of my friend Aaron Harvey, who created what ended up being one of my absolute favorite covers for anything I’ve ever done, real or imagined, when I decided what the world needed was a novel-length story to bring to life one of the craziest Star Trek toys of the 1970s, Mego’s Mission to Gamma VI playset. 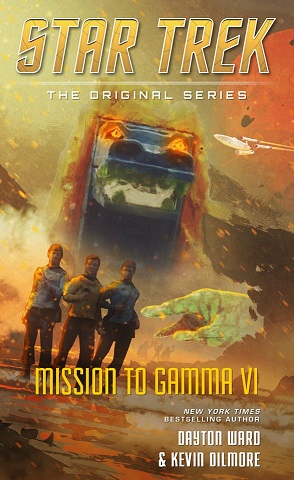 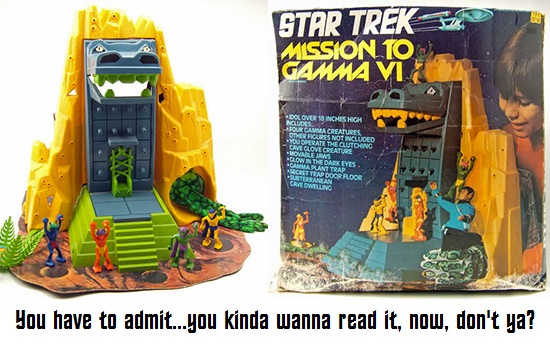 Of course, then there are the occasions when what probably should be nothing more than a quickly forgotten April Fools joke gets a little traction and before you know it there’s an actual book.

Sorry, y’all. I couldn’t help it. I’ll try to do better in the future. Nah, not really. On the other hand, it only came out a month ago, so maybe we just count Kirk Fu as my contribution to this year’s April Foolery, and call it a day.

As captain of the legendary U.S.S. Enterprise, James T. Kirk engaged in his share of fisticuffs, besting opponents with a slick combination of moves and guile that remains unmatched. Is there anyone you’d rather have watching your back as you take on Klingons, alien gladiators, genetically engineered supermen, and even the occasional giant walking reptile?

Kirk Fu is a series of unarmed combat techniques developed by one of Starfleet’s most celebrated starship captains over several years of exploring deep space. A blend of various fighting styles, Kirk Fu incorporates elements of several Earth-based martial arts forms as well as cruder methods employed in bars and back alleys on planets throughout the galaxy. It is as unorthodox in practice as it is unbelievable to behold. Including excerpts from Kirk’s own notes and personal logs, Star Trek: Kirk Fu Manual is the perfect training guide for surviving the depths of space. With proper training and practice, every Starfleet cadet can become one with Kirk Fu.

END_OF_DOCUMENT_TOKEN_TO_BE_REPLACED

We shall all sing songs of the Great Turkey Leg, on our way to the Stove O’ Kor.

Happy Thanksgiving, everyone. Here’s hoping you enjoy a restful holiday in the company of family and friends. For those unable to do so – servicemembers, first responders, doctors and nurses, and lots of other fine people answering a higher calling or simply having to work a job that precludes them from taking the day off – we thank you for your service and commitments and wish you a safe return home. And let’s not forget those who for whatever reason might be alone today, or who might need a helping hand. 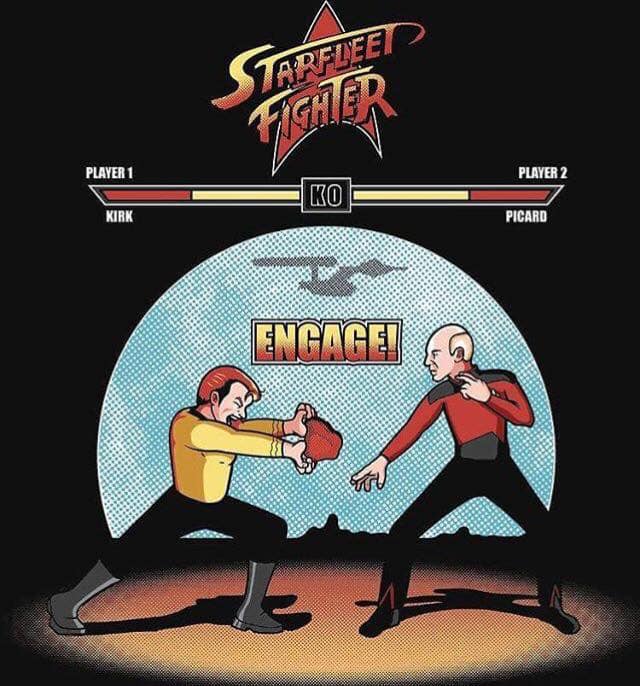 As a kid of the late 1970s/early 80s and the arcade game craze of that era, I absolutely love this.

EDIT: As you can read down the comments, we now have a source for this image! An artist who goes by the moniker Ratigan is responsible for this little slice of Trek Awesomeness. Be sure to head over to his/her profile page on TeePublic.com and check out a whole host of slick designs.

And just so you know? Kirk’s going to totally kick Picard’s ass.