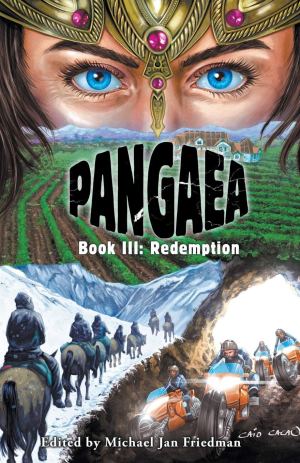 The super-continent Pangaea, on which mankind has lived its entire life as a species, has become a dangerous and unpredictable place. The ancient oppressors known as the Aristai are tearing civilization apart in order to rebuilt it in their image.

If the nations of the world are to weather the storm of death and destruction, they will need heroes–not just leaders and lawmen, but also saviors from the unlikeliest of places. A bodyguard who’s lost his way in the wilderness. A chef who knows the value of keeping everything in its place. A truck driver carrying more than what’s in his truck. A professor who’s unlocked the greatest secret of the super-continent.

In this, the final volume of the Pangaea series, see who will rise, who will fall…and who will be left to pick up the pieces.

So it seems editor Michael Jan Friedman and Crazy 8 Press sort of slid this out there in and around all the chaos enveloping most of us! Oh, that sneaky so-and-so.

It’s been five years since Mike launched Pangaea, the first volume in the shared universe he created. He invited a pretty impressive roster of writing talent to join him on this initial journey……..and then snuck me and Kevin in a side door. So, my hetero lifemate and I teamed up to write “The Ardent,” in which we introduce Ames and Grinnoj, two detectives from very different walks of life who still make a pretty good team while running down various bad guys.

I was crazy busy the following year when Mike sounded the call for the second anthology. Even though I helped Kevin bounce around a few ideas, he still did all the heavy lifting for “Unsafe Havens,” the next Ames and Grin tale for Pangaea, Book II: The Rise of Dominjaron.

So, when Mike came calling for a third and final installment, it seemed only fitting that we take our hapless cops out for one more spin. The structure of this book is different than the previous two, with Mike spinning a rather large tale incorporating a number of characters and threads from past installments. For this go-around, we all were given precise instructions on what to do with our stories in order to fit everything into the larger narrative. The result of our efforts is Ames and Grin taking “The Journey,” a story split into multiple parts and interlaced with the shenanigans facing other characters from this crazy world to which we all contributed for the series closing chapter, Pangaea, Book III: Redemption.

You can get all the details about this latest volume directly from the Crazy 8 Press site just by clicking here. And if you haven’t yet sampled the first two books, well, whaddaya know? There’s a page for the entire series.

It’s been fun to contribute to the world of Pangaea these past few years, and Kevin and I love Mike for inviting us to come and play. Maybe we can do something similar down the road, one of these days!