Another Bright, Sunny Day in Gotham City…Or is it?

The Riddler, the Penguin, the Joker, and Catwoman are all making their first fiendish forays to prey upon Gotham’s innocent citizens, but Batman and Robin, the famous Caped Crusaders, stand ready to Z-ZWAP! their diabolic schemes–all the time knowing full well that even more arch-criminals such as the Bookworm, King Tut, and False Face will follow!

Maybe you already know these stories and have thrilled to them since their debut during the inaugural 1966 season of the beloved Batman television series–but when eighteen energetic essayists all descend upon these episodes to evaluate them for enlightenment, suffice to say, citizen, you’ve never seen them like this before!

Join Jim Beard, creator and editor of Gotham City 14 Miles, as he bounds back to the Batcave with a few fearless friends to dig deep into Batman Season One’s seventeen episodes and the 1966 Batman feature film. With particular points-of-view and a worldly wealth of Bat-knowledge, these writers tackle themes, tones, and tropes beyond any previous Batman episode guides–Holy Hooks! They’ll ZLONK! ZOK! ZOWIE! your senses!

Find something “serious” to write about for a show that was never really intended to be taken all that seriously? Sure, Jim. No pressure.

The truth is that despite its over-the-top and in-your-face campy nature, the 1960s Batman series did have a few layers to it. Many of its episodes managed to slip a little bit of subtle messaging past viewers caught up in the on-screen craziness, usually in the form of some sly writing by the likes of Lorenzo Semple Jr., Ralph Ross, Charles Hoffman, and so many other writers who contributed scripts over the course of the show’s three seasons. Anything earth-shattering? Perhaps. Perhaps not. That sort of thing ultimately is for viewers and fans to decide, but maybe we can help a little.

Enter the Subterranean Grotto (not the Sub-Subterranean Grotto…that’s only for emergencies). Published by Crazy 8 Press, Zlonk! Zok! Zowie! is presented as an exploration of just what might be baked into the episodes of the show’s first season along with the 1966 Batman feature film based on the series. Kevin and teamed up to provide a look at the two-part story that features the return of the Clown Prince of Crime himself, “The Joker Goes to School” and “He Meets His Match, the Grisly Ghoul.” It’s all about how Batman’s arch nemesis involves himself in juvenile deliquency. Hey, slow day in Gotham, I guess.

Volumes examining the second and third seasons are already in the planning stages. If you’re a fan of Adam West’s Batman (and really…who isn’t), you should give this new tome a look. To the bookstore*, citizens! 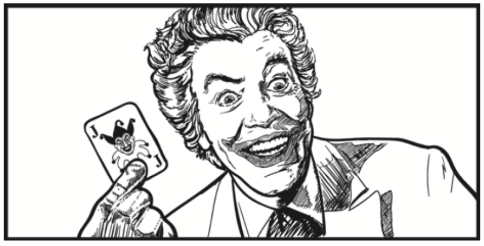 * Yes, I know that as I write this, visiting a bookstore “just because” is not really an option due to the current state of affairs, but you still have online resources to help you during these trying times until some semblance of sanity is restored!