It’s been a while since I’ve done one of these. I know I said it would be an irregularly recurring series of self-indulgent babbling, but it’s been a little more irregular than I originally planned or would’ve preferred. So, let me try to get back on the horse here and see what happens.

A short while back on Facebook, I made a post mentioning the 1983 miniseries V. This four-hour “limited” or “event series” (as it’d likely be called today) depicted the arrival of aliens on Earth with seemingly benign motives. They show up in massive, saucer-like spaceships that hover over every major city around the world and proceed to make all sorts of awesome, too-good-to-be-true promises while asking for a comparatively minor favor in return: help with engineering a special compound for use fighting environmental contamination on their home planet.

Created by Kenneth Johnson (The Six Million Dollar Man, The Bionic Woman, the Bill Bixby Incredible Hulk TV series as well as the Alien Nation TV series based on the feature film) and inspired in part by the 1935 novel It Can’t Happen Here, V also carries plenty of very unsubtle allegory to the rise of Nazi fascism and the runup to the Second World War. As the story unfolds, everything goes completely to hell as the aliens or “Visitors” and their true agenda are revealed. Bands of resistance fighters begin cropping up to fight back against the growing alien threat. While the miniseries focuses on the group located in Los Angeles, we’re told other resistance cells are rising up across the country and indeed all over the world.

The original 4-hour storyline shows some of the L.A. group’s initial successes…and failures, before leaving viewers with a pretty massive cliffhanger: the Visitors are collecting all of Earth’s water and most if not all of its population in order to help sustain the people of their home planet. By the time they’re done, Earth will be a dried-up husk and humanity little more than menu items on some Visitor buffet thousands of light-years away. 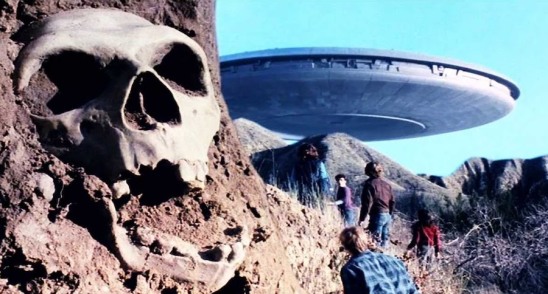 V was successful enough to prompt a follow-up, 1984’s V: The Final Battle, as well as a short-lived television series later that year. DC Comics published an 18-issue ongoing monthly series that weaved in an around the TV show, and hey! What do you know? There were also novels. 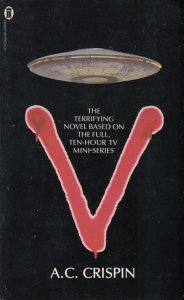 The first of what ended up being 16 paperback novels began with V, a novelization of the original mini-series and V: The Final Battle. Written by Ann Crispin, who’d already impressed fans of Star Trek novels with 1983’s Yesterday’s Son (still one of my favorites to this very day), the novelization was published by Pinnacle Books in May 1984 to coincide with the TV premiere of the latter mini-series.

A brick of a paperback for those days, the novel does a pretty impressive job adapting ten hours of screen material into a single book while still finding time to lay in bits of nice characterization and connective tissue to give the story added “heft.” The book is also notable for featuring several deviations from the final aired version of The Final Battle, including the originally planned ending and the deaths of a few characters who end up living to see the end of the story on TV. These differences were due to Crispin working from an earlier version of the teleplays and not being updated about the changes made during production.

According to stories I’ve heard over the years, Crispin originally was supposed to adapt the two mini-series as separate projects but the decision was made by the publisher to cram everything into one novel. What I’d like to know is how this affected her writing of the book. Did she start with the idea of writing them as separate novels and then had to adjust on the fly? How did that impact her so far as seeding things in the earlier parts of the story to help with various payoffs toward the end? Remember these questions because we are not done with this topic.

Following on the heels of the V novelization was V: East Coast Crisis written by another Star Trek novel and comic veteran, Howard Weinstein (who also wrote the animated Star Trek episode “The Pirates of Orion”) and Ann Crispin. This kickstarted a theme which would recur in several of the follow-on novels: stories focusing on characters and locations not seen on either of the mini-series.

The practical reason for this choice was these books were being written at the same time NBC was readying a weekly television series picking up after the events of The Final Battle and set to premiere later in 1984. Pinnacle Books and the writers already contracted to write V tie-in novels had almost no access to materials like the series writer’s guide, scripts, or any hint about the direction of the new show. So, the decision was made to tell stories which would not run afoul of or otherwise stand at odds with the series. For my money, this was a brilliant idea in theory if not always execution, as it helped to depict the ramifications of the Visitors’ campaign on Earth as a conflict unfolding around the country and across the world. 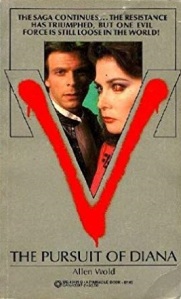 The advantages of this approach over trying to use the TV characters is proven pretty much right out of the gate with the next book published, Allen E. Wold’s The Pursuit of Diana, which DOES focus on the TV gang and tells an entirely different (and incompatible) story of the immediate aftermath of The Final Battle. So, you see? Whoops.

After premiering on NBC in October 1984, V: The Series only lasted 19 episodes before being canceled in March 1985. The show suffered from many of the same ailments that plagued science fiction TV series of the era on network television: too expensive to produce for the ratings it was getting, subpar stories which contributed to people not wanting to watch it, resulting in reduced budgets, cast members being removed, and repeat all of that until NBC put it out of its misery.

Meanwhile, V novels continued to chug merrily along, with Pinnacle releasing a new book every month beginning in December 1984 with The Pursuit of Diana and continuing on until July 1985 with Ann Crispin’s Death Tide. Pinnacle’s 11th (and last) novel for the line came in September with The Texas Run written by George W. Proctor. Pinnacle fell into trouble around this time before the imprint folded altogether, leaving five additional V novels in a sort of limbo for a couple of years before Tor Books published them.

The complete list of V novels from the Pinnacle/Tor years:

Now, here’s where things kick up a notch. 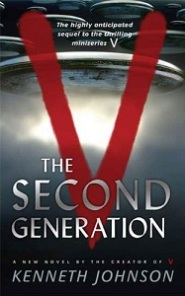 V creator Kenneth Johnson, who was not at all involved in The Final Battle or the weekly TV series, announced in the early 2000s that he was developing a new V story. Set 20 years after the events of the Visitors’ initial arrival on Earth, Johnson’s new story would ignore everything that came after the original 4-hour mini-series. When Warner Bros. – the studio behind the V mini-series and TV show – stated their preference to reboot the property, Johnson adapted his screenplay into V: The Second Generation, which was published in February 2008.

Released in November 2008 was an updated version of Ann Crispin’s original V novelization, only this edition is markedly different from the 1984 version. All of the material covering the events of The Final Battle are excised, replaced with a new piece that bridges the gap between Crispin’s adaptation of the original mini-series to the events of The Second Generation.

And *that* was the end of V novels. For now, anyway.

Among the various remakes, reboots, and “reimaginings” so prominent in the late 2000s was a new take on V, an updating of the original premise that aired on ABC between 2009 and 2011. While pursuing (at least in part) different themes more relevant to an early 21st-century audience, the new version in some ways was just as oddly prescient as the original miniseries. Make of that what you will. Unlike its predecessor, however, the new series did not spawn any tie-in novels or comics.

There have been rumors circulating for years that Kenneth Johnson was attempting a new, feature film take on the series. According to Johnson himself, his new plan is a big-budget updating of the premise for the 21st century, with “a cinematic trilogy which will tell the full epic tale in the manner I always envisioned.” Johnson was at San Diego Comic-Con this past July promoting a shiny new Blu-ray upgrade edition of the original V mini-series (yes, I’ve already pre-ordered my copy) and shared details about his plans for the feature version of the story. Hey, if the original creator is involved, I’m all eyes and ears. Take my money.

Perhaps if Johnson is successful and V is revived or reimagined for a whole new generation of fans, tie-ins like novels and comics will follow. I guess we’ll have to see what we see, amirite?

Previous entries in this series:
Introductory Post
The Six Million Dollar Man and The Bionic Woman
Planet of the Apes