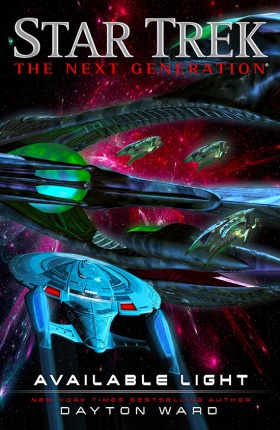 Star Trek: The Next Generation

Section 31, the covert organization which has operated without accountability in the shadows for more than two centuries, has been exposed. Throughout the Federation, the rogue group’s agents and leaders are being taken into custody as the sheer scope of its misdeeds comes to light. Now Starfleet Command must decide the consequences for numerous officers caught up in the scandal—including Admirals William Ross, Edward Jellico, Alynna Nechayev, and Captain Jean-Luc Picard who, along with many others, are implicated in the forced removal of a Federation president.

Meanwhile, deep in the distant, unexplored region of space known as the Odyssean Pass, Picard and the crew of the Starship Enterprise must put aside personal feelings and political concerns as they investigate a massive mysterious spacecraft. Adrift for centuries in the void, the ship is vital to the survival of an endangered civilization which has spent generations searching for a world to sustain what remains of its people. Complicating matters is a band of marauders who have their own designs on the ancient ship, with only the Enterprise standing in their way…

Welcome back to the 24th century! It’s been a long road, getting from there–

After an extended hiatus thanks to forces beyond the control of mere mortals, Simon & Schuster is ramping up its publication of Star Trek novels, continuing an effort they’ve shepherded since 1979 and the release of their novelization of Star Trek: The Motion Picture. Since then and even with the occasional bump in the road, S&S through imprints such as Pocket Books, Wallaby Books, and now Gallery Books has continued to publish Star Trek novels, short story collections, and a broad spectrum of reference books and other cool things.

I’ve been privileged to contribute to that effort for what is fast approaching 20 years, either working solo or in partnership with my bud and frequent co-writer, Kevin Dilmore, and often collaborating with other writers and editors to varying degrees depending on the needs of a particular project. Available Light is my 21st Star Trek novel and 26th novel overall, with about half of those written with Kevin. Then there are the novellas, short stories, magazine articles, and funky things like the Vulcan and Klingon Empire travel guides. Yes, Star Trek has been pretty good to me these past two decades and in some ways, I feel in some ways like I’m really just getting warmed up. I think I may be able to keep doing this for a while longer.

So, for those wondering, Available Light picks up the ongoing Star Trek: The Next Generation post-film/novel-focused narrative a bunch of us have been spinning for a good number of years now. More specifically, it picks up the action after we left you hanging back in the summer of 2017 with David Mack‘s Section 31: Control and my own Hearts and Minds. Dave dropped a big bomb right into the middle of our breakfast table with Control, and the effects will quickly start to become apparent first with this book, and then Collateral Damage, Dave’s own ST:TNG novel coming later this year.

And, we’ve had conversations about what happens after that. Mwuah-ah-ah.

Available Light is now available at bookstores everywhere, in trade paperback, e-Book, and both digital and CD audiobook editions. If you’re still one of those folks who loves going to an actual store for your reading material, I humbly suggest patronizing your local independent bookseller. If that sort of thing isn’t feasible for whatever reason, then of course we have other options:

In addition to providing a permanent home for links to find and order the book, this blog entry also will serve as the book’s “official” Q&A thread. Those of you who want to chat about the book, feel free to post your questions/etc. to the comments section. For those of you who’ve found this page and perhaps not yet read the book, BEWARE SPOILERS ARE POSSIBLE FROM THIS POINT FORWARD.