Yep, it’s time for another walk down Nostalgia Lane that you didn’t ask for and probably don’t need. Since that’s the running theme of this entire blog thing of mine, we can at least agree I’m consistent.

Back at the beginning of the year, I decided I would offer up an irregularly-recurring feature that I’d use to revisit favorite movie and TV tie-in books. After taking a fond look back at novels based on The Six Million Dollar Man and The Bionic Woman and knowing I wanted to avoid talking too much about Star Trek novels (at least right away), it seems obvious to me the next old-timey series deserving of some love is Planet of the Apes!

As is true of Star Trek and the “Bionic shows,” Planet of the Apes was another series (of movies and television shows, in this case) I came to love very early on. Though I never saw any of the original five films in theaters, I did watch both of the subsequent television series as best I could during their original broadcasts in 1974-75. Just as I was learning about books based on the other two franchises around this time, so too did I discover the same was true of Apes.

First I found a copy of Pierre Boulle‘s original 1963 novel at the library, after which I found a paperback of Jerry Pournelle’s novelization of Escape from the Planet of the Apes occupying space on a department store book rack. Unlike the Star Trek novels and episode adaptations which seemed to be everywhere, tracking down the books tying into the other Apes films would prove to be much more challenging.

(Left: the cover that seemed to dominate re-issues of the original novel throughout the 1970s and into the early 80s. Right: The cover on the edition I own.)

The 1968 Planet of the Apes film was the only one of the five “classic” movies to not receive a novelization. Instead, Pierre Boulle’s original novel was simply reissued with a “tie-in” cover. As for the sequels, their respective novelizations were written by some pretty heavy hitters of the day:

Michael Avallone, Jerry Pournelle, John Jakes, David Gerrold? That’s a serious list for what was – at that time, at least – a rather lowly regarded niche of writing. Truth be told, it still is and yet that doesn’t stop some of the bigger names from taking on novelizations and original novels based on popular franchises, but back then? There were many who viewed such writing as just a step up (or down) from writing smut of the sort that in the days before home video and the internet could be found in roadside porn shops and “seedy” side street book stores.

(Yes, there are people who still hold those views today, but we tend to ignore them for the most part, because those of us writing such books are having too damned much fun doing it, so nyah. For that matter, this is true for those who write erotica and even “smut,” so double nyah.)

As I said earlier, it took me a while to track down copies of these, but worse than that? It was more than a decade after their publication that I even knew there were books based on either of the television series, let alone both. It was just dumb luck that I happened across the first three novelizations of episodes from the 1974 live-action Planet of the Apes TV series, and in those long ago days before eBay? It was another few years before I was able to add #4 to my bookshelf.

Written by noted science fiction author George Alec Effinger, each of the four books novelizes two episodes of the series, linked (if anything) by thematic elements rather than chronological or broadcast order. Interestingly enough, the first volume, Man the Fugitive, does not adapt the series’ first episode, which portrays the astronauts’ crash landing and sets up the show’s basic premise. Effinger does fill in that bit of expository detail well enough, however.

As I did with these books, I also stumbled across the tie-ins for the Return to the Planet of the Apes animated series. In a manner similar to what happened with the live-action show, I only found two of the three books at first, and spend a good bit of time hunting down the third.

Writing under the pen name “William Arrow,” author William Rotsler’s three books adapt the entire 13-episode run of the animated series, which unfolded in serialized form on Saturday mornings in 1975. I’ve always found it interesting that the publisher, Arrow Books, opted to use photography from the Battle for the Planet of the Apes film for the first book and the live-action series for the other two novels. I guess someone figured those would look better than art from the cartoon’s admittedly rough and wanting animation style.

While Marvel Comics and later Adventure Comics saw to it Planet of the Apes was treated to several stories in comics form featuring original characters and situations, it would not be until the early 2000s that anything other than a straight adaptation/novelization was committed to prose. For that, we have to thank Tim Burton and his 2001 “re-imagining” of Boulle’s novel and the 1968 film.

After adapting the film’s script into a novel, author William T. Quick also penned two prequels, The Fall and Colony, which set up the backstory thousands of years before the events of the film. As I tend to be something of a completest with these sorts of things, I read all three books but over time I ended up culling them from my library. 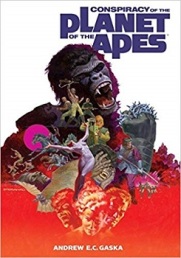 Aaaaaaaaaaaaaaand then once again Planet of the Apes escaped the touch of tie-in books, at least for the most part. While Star Trek and Star Wars books marched merrily on, my poor Apes got almost no love at all for more than a decade. The lone exception was Andrew E.C. Gaska’s Conspiracy of the Planet of the Apes, which is actually something of a story within the story taking place in and around the events of the 1968 film. Familiar scenes from the movie are told from the perspective of different characters, bridging all news scenes which unfold “beneath, between, and behind” what you saw on screen. The book is noteworthy for featuring some truly lush artwork, including all-new pieces commissioned from such names as Joe Jusko, Dave Dorman, Andrew Probert, Jim Steranko, Ken Kelly, and David Seidman just to name a few of the names I recognized going in.

It’s interesting to note that like the 1968 film, Rise was not adapted into novel form. Conversely, both Dawn and War not only received novelizations – written, respectively, by Alex Irvine and Greg Cox – but “official prequel” novels penned by author Greg Keyes, as well.

Firestorm bridges the gap of time between Rise and Dawn, with Revelations performing the same duties for Dawn and War. Each novel does a decent job answering questions we all had about characters from the previous film as they maneuver the pieces on the Apes game board to set the stage for the subsequent movie. If you enjoyed the newer movies as I did, the prequels provide great backstory.

The success of the recent movies has sparked additional interest for new Apes stories on the printed page. In addition to publishing reprints of the classic Apes novelizations, Titan Books also gave us 2017’s Tales from the Forbidden Zone, the first-ever collection of all-new Planet of the Apes stories from the “classic continuity.” Edited by Jim Beard and Rich Handley, the stories span each of the original five films as well as both television series, and the book’s roster of authors includes some definite heavyweights like Jonathan Maberry, Nancy A. Collins, Kevin J. Anderson, and a whole bunch of other fine word slingers including a certain long-winded blogger of your acquaintance.

Another spin-off from the newer films is Caesar’s Story. Presented as a “journal” of sorts, the book chronicles through a series of anecdotes, stories, and illustrations the life and rule of Caesar, the ape at the center of the three movies as told by Maurice, Caesar’s most trusted friend, and intended for Cornelius, Caesar’s infant son, so that he might one day know and understand the full truth of what his father accomplished.

The newest title (as of this writing, at least) is Andrew E.C. Gaska’s Death of the Planet of the Apes. Published in November 2018, the story is somewhat similar in approach to Gaska’s earlier Conspiracy of the Planet of the Apes, spinning a tale that bridges the gap between the 1968 film and its first sequel, Beneath the Planet of the Apes. Readers learn what happened to Astronaut Taylor during this period, but Gaska also introduces a rather large cast of characters and storylines to provide “continuity filler” for numerous elements of the classic Apes canon. Fans who love connecting the dots of the mythos will have plenty to chew on, here.

Will there be future Apes stories in novel form? One can only hope, just as I can hope to maybe get my stinking paws on the opportunity to write one. 🙂