In the annals of television history, there have been those rare occasions when something has been conceived, developed, produced, and aired without anyone along the way thinking better of the whole thing. KISS Meets the Phantom of the Park. Supertrain. Cop Rock. Legends of the Superheroes. That Lebron James thing. Galactica 1980. The Tuesday Night Book Club. You get the idea.

No such list is complete without the Star Wars Holiday Special on it, if not capping it.

Sorry, fellow Star Wars fans. We have to own this one.

It was on Friday, November 17, 1978 that this singular entry in the Star Wars mythos premiered to audiences tuning into CBS that evening. For those of us who saw Star Wars first-run in theaters, this was a highly anticipated moment. I begged and pleaded for my parents to let me watch it on “the big TV” in the living room rather than the dinky one they let me have in my bedroom. There I was, lying on the living room floor, all of 11 years old, while my mother read a book and my father managed to avoid voicing his contempt at all things space-y or science fiction-y, ready to behold an all-new adventure from that galaxy far, far away….

Following the events of the original Star Wars film (yeah, yeah. “Episode IV: New Hope“), Han Solo and Chewbacca are cruising back to Chewie’s home planet so he can be with his family to celebrate “Life Day,” but they’re being chased by the Galactic Empire who of course is still pissed about that whole Death Star thing and is hunting anyone connected to the Rebel Alliance.

One has to wonder what would have happened if social media had existed that evening, with millions of Star Wars fans live-tweeting or posting reaction videos on YouTube. I think it’s a safe bet that the entire internet would’ve melted to slag before this thing’s first commercial break. Part Star Wars and part variety show, it succeeds at being neither, yet does so in a manner from which it’s impossible to look away. It is a glorious dumpster fire, if in fact one can use such a term in a complimentary fashion.

As it unspools to our ever-increasing horror, we catch up with pretty much everyone who survived the events of the first film, and we also meet a few new characters. Some, like Boba Fett – introduced as he is in a kind of Heavy Metal -like diversion into animation for reasons that I maintain are firmly rooted in mood-altering substances – would go 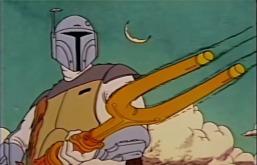 on to make numerous appearances and contributions to Star Wars lore. Others, like Bea Arthur’s Ackmena (a personal favorite) and Harvey Korman’s Krelman, are perhaps best left in the trash compactor of Star Wars history. We do get to see Chewie’s home planet and his family, though even that can’t escape ridicule thanks to the names given to Chewie’s father and son: Itchy and Lumpy.

The decision to make it a sort of variety show/musical hybrid means calling upon a literal all-star cast of entertainers of the day. Along with the aforementioned Bea Arthur and Harvey Korman, Art Carney, Diahann Carroll, and the band Jefferson Starship are on hand trying to lend an air of dignity and much-needed humor to the proceedings. The music segments are like acid trips (or antacid trips, as the case may be) and watching Korman struggle to find the funny in the material he’s given is painful. Only Bea Arthur comes out relatively unscathed, because Bea Arthur could do no wrong (Fight me). If the entire thing had been delivered with the same tone and sensibility – and maybe add some Muppets or strippers or something – those of us who watched it during its original broadcast would likely still have scars, but they might not be so deep and lingering.

And yet, I admit to having something of a soft spot for it. When I was 11 and Star Wars was everywhere and everything, as I read the monthly comic from Marvel or the novelization or Splinter of the Mind’s Eye over and over again, this helped scratch the Star Wars itch, even in an admittedly inept way.

Derided by critics and fans alike, the Star Wars Holiday Special has nevertheless achieved a weird flavor of cult-like status. How they convinced the main Star Wars cast to participate in this has to rank as one of the most epic cocktail party “They had embarrassing photos of me” stories ever. It was never broadcast after its single airing and has never been officially released on home video in any format. You can find links to it here and there, though, and the best April Fool’s gag ever would be for the whole thing to receive a total remastering for 4K Blu-ray.

George Lucas has fervently denied having any connection to its production, and cast members like Harrison Ford insist they’ve never seen it. Carrie Fisher, in her usual style, seemed to take the whole thing in stride, joking in an interview with The New York Times that she made Lucas give her a copy of the special so that she could have something to play at parties when she wanted everyone to leave. Damn, I miss her.

For better or worse, the Star Wars Holiday Special is a thing that exists, and it’s now 40 years old. I’m gonna go and cry in my blue milk, now.