It’s a question for which I often receive some variation: “What film or TV property would you want to write for?”

While this sometimes means which actual films or television series for which I might think about writing scripts, in reality this usually refers to writing some kind of tie-in project such as a novel, comic, or whatever. While I’ve given occasional thought to the other thing, the simple truth is that A) scriptwriting is a wholly different skill set than writing prose fiction, and B) I ain’t moving to Hollywood or points adjacent. I mean….ever, and since that’s usually a requirement of the job, it means I’m out, yo.

Instead, I’m sticking – in large part, at any rate – with what I know, and what I know is prose. That means tie-ins, be they adaptations/novelizations, or original stories springing out from the creative springboard that is someone else’s intellectual property. For example, you know…Star Trek…which you may have noticed shows up from time to time on my writing resume.

Beyond the rather large sphere that is The Final Frontier, there are any number of properties for which I’d welcome with great enthusiasm the opportunity to contribute something. If you’d asked me this question 40 years ago, chances are good that I’d have answered with something like Planet of the Apes, The Six Million Dollar Man, or Space: 1999. 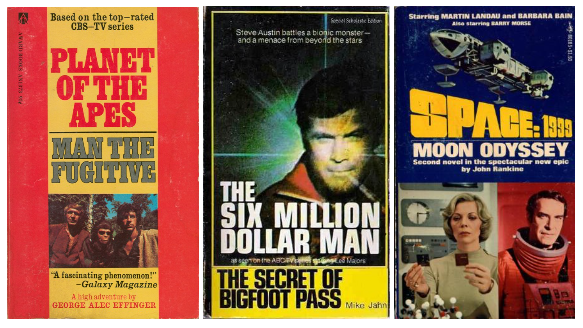 Welcome to a peek at my bookshelf, circa 1978. Who am I kidding? I still have these.

Come to think of it, those are all still valid answers now, which is good because 40 years ago I was 11 years old and my writing back then would’ve sucked something fierce.

(Yes, there’s an argument that age has not done anything for me in this regard. Shush, you.)

Luckily for me, modern entertainment is still held in the seemingly unbreakable grip of nostalgia, so it’s entirely possible that any or all of those aforementioned properties will be remade, rebooted, reimagined, or re-something else. A couple already have.

Okay, one has (Planet of the Apes), and another is supposedly doing so as I write this (The Six Million Dollar Man). Forget it. I’m rolling. Besides, the only thing more certain than a reboot is another reboot. So, hope springs eternal, and all that.

Yes, I’ve already written for Planet of the Apes, in the form of a short story in the rather kick-ass anthology Tales from the Forbidden Zone, edited by Rich Handley and Jim Beard. They let me revisit the characters and situations from the 1974 live-action TV series, of which I’ve always been a fan, and I would love to go back and pick up where I left off with that story. As for Steve Austin the Bionic Man? With a new movie coming (we think) in 2020, there’s potential for there to be tie-ins not just for the film and its updating of the basic premise, but perhaps also a renewed interest in the classic series, and hey! Writing a movie novelization is still on my Bucket List, and this one would be a hell of a way to check that box. Just sayin’.

What else? Well, let’s see….Aliens? Sure thing. I’ve done a 24 novel, and if the rumors about a new series that’s a prequel to the original show are true, then yeah, I wouldn’t mind wading back into that particular pool. I certainly wouldn’t mind a crack at something tied to the revamped Lost In Space as seen with the new Netflix show, and just for the sheer insanity of it? Galaxy Quest and The Orville.

As for really pie in the sky stuff? Star Wars, Indiana Jones, or maybe something featuring Snake Plissken from Escape from New York. The likelihood of any of those happening is pretty slim, but a guy can dream.

And though the heyday of such books arguably is pretty much behind us, I still want to do some kind of “men’s adventure” tale like Mack Bolan or Remo Williams or Mark Stone the M.I.A. Hunter, writing under a house name and just going nuts with the sort of over-the-top action and mayhem for which such books are lovingly known. Maybe I should cut out the middleman and make up something of my own in that vein. Sounds like a plan, right?

Meawhile, I’ve got enough to keep me busy…for the time being, at least.

So, thoughts? For those of you who read my stuff and/or read these types of books, which property would you like to see me take a crack at?