Look,  I had to get at least one more of these in before you all head out for summer vacations and whatnot, right?

This time, I have a sit-down with Chris Clow, Rachael Clow, and Cicero Holmes over at the Discovery Debrief podcast.  As their name might imply, these folks have been discussing, reviewing, and examining Star Trek: Discovery, and that includes the occasional foray into the “other stuff” connected to the new series. You know, books and comics and whatnot.

Enter: me. Well, me and Drastic Measures.

For this latest installment and after having already had an extensive discussion about the book itself in a prior episode, they invited me to chat with them about my writing as well as how I came to be involved with writing Drastic Measures and the unique challenges (and opportunities!) it presented. There’s also a larger conversation about the fun and challenges of writing within the Star Trek universe and some descent into geekery as we talk favorite episodes, films, “dream  writing projects” and so on and so forth.

So, you say you wanna hear all of this? Give it a listen: 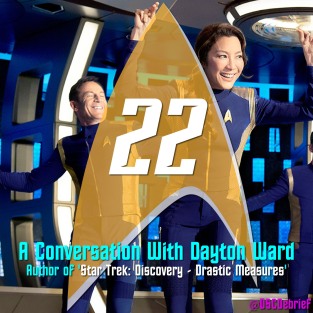 Many thanks to Chris, Rachael, and Cicero for having me on for such a fun chat. Here’s hoping we have reason to do it again, some time. 🙂