“The first rule of Vanguard is that you do not talk about Vanguard.”
— Admiral Heihachiro Nogura, 2269 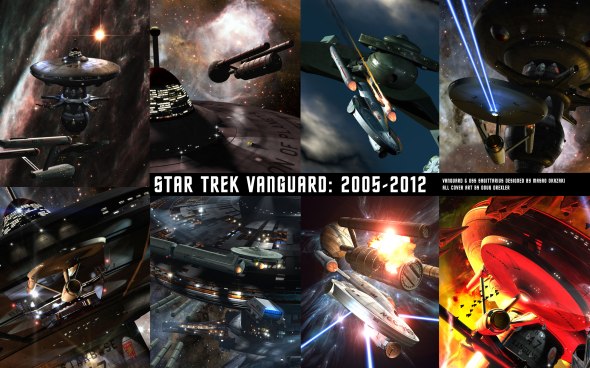 Specifically let’s talk about Star Trek Vanguard, the “literary spin-off” series of novels conceived by former Pocket Books editor (and current Tor Books wizard) Marco Palmieri and David Mack, way back in 2004. Marco and Dave gave birth to this super-cool series intended to run in parallel to the adventures of Captain Kirk and the Enterprise during its five-year mission as (mostly) chronicled in the original Star Trek series.

For those not clued into the series, I encourage you to click on the link in the previous paragraph, which will give you a complete rundown. Go on, do it. I’ll wait.

TL;DR? Vanguard was by-god awesome, to write and to read. I’ll always be grateful to Marco and Dave for choosing to include me and Kevin in what is, to this day, one of the absolute best times I had writing Star Trek, and one of the accomplishments of which I’m most proud.

So, now that we’ve got that out of the way, let’s get to the reason I’ve gathered you here today. For the month of March, Pocket Books is running a special promotion whereby interested parties can score the entire Star Trek Vanguard saga in Amazon’s Kindle format, with each title priced to go at just 99 cents apiece.

Those of you who’ve elected not to read this series just yet, for reasons surpassing understanding, are now largely out of excuses. I mean, look…I’m even laying out the links for you, and everything:

Who loves ya, huh?

The current deal is valid for the entire month of March, so you’ve got that long to add all of this amazing Vanguardian goodness to your e-Book library. Enjoy!

10 thoughts on “Get the entire STAR TREK VANGUARD series as Kindle e-Books for a steal!”