And yes, somebody decided my endless, stream-of-consciousness yammering was worth preserving for future listeners. You think people would learn, but until they do, I’ll be in your podcasts, messing with your ears.

This time, I join Floyd Dorsey and Brandon-Shea Mutala, hosts of Warp Five, Trek.fm‘s podcast devoted to all things Star Trek: Enterprise. Though I’m a frequent visitor/disruptor of the Literary Treks podcast, this is one of those rare times when I make my way into a different Trek.fm studio with the intention of bothering other hosts. Floyd and Brandon were quite welcoming as we all settled in to discuss the Enterprise second season episode “Carbon Creek.”

After a brief interview to suss out my secret origin story, the bulk of the podcast takes the form of a live commentary as we watch and comment on the episode. The story involves the visit to Earth by a Vulcan science team, who observe the launch of Sputnik I in October 1957. Their ship crashes in rural Pennsylvania and their captain is killed, leaving the three survivors to hide among the human population until a rescue ship arrives.

Why am I in this thing? Because characters and situations originated in this tale inform not one and not two but three novels I’ve written: From History’s Shadow, Elusive Salvation, and the (as I write this) forthcoming Hearts and Minds.

As we discuss before the commentary, I gained a greater appreciation of Enterprise during a rewatch a few years back when I was researching From History’s Shadow, and “Carbon Creek” is one of the episodes I’ve liked even from back during the show’s original run. So, it was fun to revisit this particular story and talk about how it fits into the Star Trek mythos, including my own books. 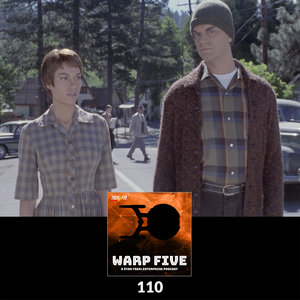 Many thanks to Floyd and Brandon for inviting me to join them for their rewatch of the episode. If you’re a fan of Star Trek: Enterprise, be sure to check out the other Warp Five commentaries, each one spotlighting an episode of the show.