Last week, I was contacted by a representative from Simon & Schuster’s publicity department. She was handling whatever duties in this regard might be required for the pending release of Headlong Flight, my new Star Trek: The Next Generation novel, which officially goes on sale tomorrow (January 31st). Apparently, she had received an interview request for me.

Now, I have to tell you that if you count the time spent submitting to the Strange New Worlds writing contests, my relationship with S&S stretches back to 1997. Wanna guess how many times the publisher has been contacted about interviewing me?

Put your fingers down. It’s zero. 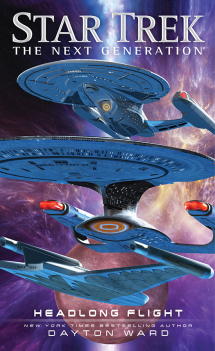 Normally, people wanting interviews just reach out to me directly via that email thing, rather than bothering an overworked, understaffed publicity office who has real writers with BIG NAMES on the covers to worry about. Compared to them, I’m small fish.

So, this was something of a pleasant surprise. I accepted the request and in short order was connected with Paul Semel, who writes news and reviews about TV and movies, books and comics, games, and all sorts of other pop culture shenanigans. For whatever reason, he took an interest in me and the new book, and the result of that is this new interview you can find only at Paul’s website, PaulSemel.com:

Oh, and hey! There are spoilers in that interview. Seriously. Don’t say I didn’t warn you.

Many thanks to Paul for reaching out, and to Hannah at S&S Publicity for setting it all up.