Along with all the big stores doing their usual holiday shopping/gladiatorial combat thing, there also are the local and independently owned businesses in our various communities. 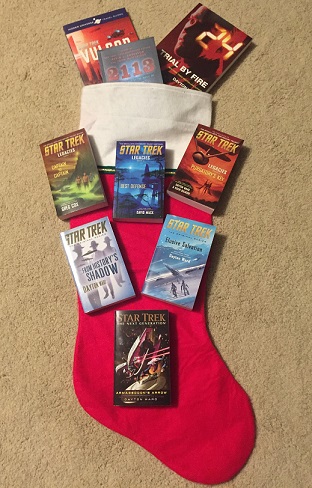 To begin this with some shameless self-promotion, both Geeks of Doom and Sci-Fi Bulletin have both published “holiday shopping guides” for the geeky book lovers on your list, and both lists feature a number of titles written by friends of mine. Oh, and hey! I’m happy to report that the Vulcan Travel Guide and the Star Trek: Legacies trilogy made both lists. Boo. Yah. The lists contain books by several friends and colleagues, including fellow Star Trek scribes Kevin Dilmore, Greg Cox, David Mack, John Jackson Miller, Paula M. Block & Terry J. Erdmann, Michael & Denise Okuda

And where might you find any or all of my various collections of scribblings, or those of more worthy word pushers? I recommend checking with your local independent bookseller so that you can “#ShopSmall” and “#ShopLocal.” With that in mind, I’m going to boost the signal for my friends at Reader’s World, a small yet awesome bookstore located here in Lee’s Summit. If you’re local to the KC area, you might consider checking them out this weekend. In addition to today’s Black Friday sales, they’re participating in tomorrow’s “Small Business Saturday,” and I’ll even be there with several other local writers, helping out for a while. Bring your books to get signed, or support the story by buying a copy there, and I promise to scribble all over it.

On the comics side of things, I have to recommend my local comics shop, Pulp Fiction Comics & Games, also located in Lee’s Summit. These folks have a store chock full of goodies, and are well-versed in the latest comic and game trends. The store is also very welcoming regardless of age, gender, taste in music, taste in sports teams, and even taste in fashion. I think they may have thrown out a guy wearing Crocs, last year, though.

My backup comic shops are Pop Culture Comix and Elite Comics, both in Overland Park across the state line. In addition to also having stores crammed to the rafters with all sorts of wonderful geekiness, you have a good shot at a piece of cake whenever you wander into Elite, as the owner pretty much is always looking for an excuse to have a cake in there.

If you’re shopping for the book lovers on your list this season, you might well find something interesting and different from one or more of the numerous small independent publishing houses that are…well…they’re everywhere. They’re in your town and mine; a publisher might even be your neighbor, co-worker, or family friend. Small press houses, despite scrapping every day to retain whatever foothold they’ve managed to gain on the beachhead of publishing, often get overlooked or even dismissed in this crazy publishing world and its emphasis on best sellers, blockbusters, and the latest celebrity self-help tome.

I’ve had the privilege of writing for a handful of such houses, and had a lot of fun doing it. If you’re looking for some slick booky-type things to finish out your holiday shopping, you could do worse than to sample the wares of some of these rather nice folks:

First up, a local effort: Eric Reynolds over at Hadley Rille Books has really put together something special, publishing books that feature, “critically acclaimed authors craft a variety of worlds with complex characters, including every day people who face extraordinary challenges.” Eric’s created a very impressive catalogue of titles and harness a diverse, talented stable of writers. Go. Look.

Friends Rich Handley and Paul Giachetti are the minds behind Hasslein Books, a New York-based outfit that publishes “unauthorized” reference books on a number of pop culture properties. A couple of my favorites are their tomes devoted to Planet of the Apes, but they’ve also got one about G.I. Joe that I’m looking forward to checking out. Despite having never met face to face, Rich and I have been internet friends dating back to the 1990s when we were both on America Online. Rich has also been an editor for essays and fiction I’ve written for projects he’s helped shepherd. If you’re shopping for the pop culture enthusiast on your list and looking for something you might not find in a store, be sure to check these guys out.

Elsewhere, Crazy 8 Press is an author-driven cooperative venture from friends Russ Colchamiro, Peter David, Bob Greenberger, Glenn Hauman, Michael Jan Friedman, Paul Kupperberg, and Aaron Rosenberg. Lots of good stuff from them is to be found there, both individually and together in various combinations. Crazy 8 published the ReDeus series of anthologies including Divine Tales, in which I had a story included a few years ago. Last year, C8 also published Mike Friedman’s Pangaea, in which Kevin and I also got to play around a bit.

Yard Dog Press: Headed up by Selina Rosen and her partner, Lynn Stranahan. They and pretty much everyone who writes for them are funny, irreverent, and have this nasty habit of telling some damned fine stories. My connection to the Yard comes because of one of Selina’s own creations, Bubbas of the Apocalypse, for which I’ve written stories featured in a couple of her anthologies. YDP also published a lot of work by the late Ken Rand, including a whole bunch of stories set in one of my very favorite of his creations, the Lucky Nickel Saloon.

Sky Warrior Books: Headed up by Maggie Bonham, this is another ongoing awesome effort within the independent publishing realm. Maggie is one of the savviest people I’ve encountered when it comes to promotion and leveraging the advantages of small press and e-Publishing platforms. She and her editors also are very selective, which of course begs the question of how I got anything published there. Definitely worth checking out if you like fantasy and science fiction of varying flavors.

Elsewhere, word slinger and zombie lover Elizabeth Donald is the mastermind behind The Literary Underworld, which caters to all of your undead, supernatural, and otherwise paranormal needs. She’s also running a Black Friday sale RIGHT FREAKING NOW, so you should probably go and have a look-see.

Okay, then. Those are just a handful to get you started, but there a lot more of these hard-working folks out there. Feel free to pimp your favorite small/indie press here in the comments, be it for books, comics/graphic novels, magazines, poetry, other art, whatever. Even if it’s just you looking for a place to safely promote your own work, link away. I need new stuff to check out, myself.