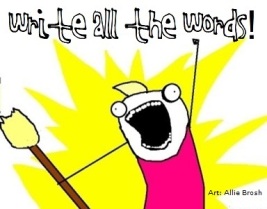 Here we are, well into 2016’s last quarter-mile. Where the hell has this year gone?

In and around Halloween, Election Day, Thanksgiving, Christmas, shopping for Christmas, the War on Christmas, and the end of football season, I have been and will be moving many pieces around the writing game board as I’m already starting to hone in on the projects which will carry me well into the new year. I’m due to start writing a novel in the next couple of weeks, along with a short story that’ll be due in January. There’s another novel already in the queue, and I’m in talks to add at least one more, depending on how particulars shake out, along with some other projects that are in very early discussion stages.

Meanwhile, here’s what went down, writing-wise, in October:

Headlong Flight: A Star Trek: The Next Generation novel set after the events of Armageddon’s Arrow as well as the Prey trilogy that’s been released during October-December of this year by fellow word pusher John Jackson Miller. I received the final pass pages last week from my editor, and turned in my last notes just yesterday, in fact. The next time I see it will be as an actual book when it hits store shelves on January 31st. You’ve seen the cover, right?

Hearts and Minds: Another Star Trek: The Next Generation novel for 2017: The current Novel In Progress. The events of this story take place at a point after Headlong Flight, but of course there’s a twist…or three. I delivered the manuscript for this on September 11th, and after a brief bout with some quick editor’s notes, sent back a revised version on the 25th. It has to go to the studio for approvals as well as receive a rigorous copyedit, and it’s possible I’ll see the results of that toward the end of the month. At last report, the book was scheduled for publication on or about Tuesday, May 30th, 2017. Stay tuned!

Hidden Universe Travel Guides – Star Trek: The Klingon Empire: We are at the art stage now, and I’ve already had a chance to review the preliminary layout and some rough art, and I sent my feedback to my editor on October 31st. I’m thrilled to report that Livio Ramondelli and Peter Markowski, who provided all of those amazing illustrations for the Vulcan guide, are back for a second round of shenanigans. The book is currently set for publication on July 17, 2017. More details on this as things start coming together!

Predator short story: Writer/Editor Bryan Thomas Schmidt invited me to pen a tale set in the universe of the classic alien hunters introduced in 1987 with the awesome Arnold Schwarzenegger flick of the same name. Now it’s a full-blown franchise, of course, with a new movie coming next year. Titan has greenlit Predator: If It Bleeds for publication next year, and I’ve been given a due date of January 30th for delivering my story.

Unidentified Tie-In Project: I was contacted out of the blue back in August about possibly writing a novel set in a franchise that’s new to me, but has its own groups of devoted followers. I’ve been working to get up to speed a bit so I can start pulling together an outline, but this should be fun. More on this if and when it all starts to move forward and I’m allowed to share details.

Another Unidentified Tie-In Project: This one’s a bit closer to “home,” but still a different type of writing than I’m used to doing. However, the person running the show is very enthusiastic and he seems excited to have me aboard. I’ve provided some material already that’s been favorably received, and I’m discussing with the editor about what’s next. Once all the paperwork and such is all in order, I can actually tell you what I’m doing!

And Another Unidentified Tie-In Project: Unexpectedly heard back about this project on October 26th and it appears this is another one that’s going forward! We’re working out contract and deadline details now, but as of now I’m looking at developing a full-blown outline between now and the holidays, with an eye toward writing it during the first few months of the new year. I was honestly thinking this one wouldn’t happen, and I’m rather happy to be wrong. As with the other “Unidentifieds,” I’ll be able to share more info as things  get ironed out, firmed up, signed, and so on.

“The Menace of the Mechanitrons!”: Our story for the second issue of IDW Publishing’s Star Trek: Waypoint miniseries. As most of you should know by now, our story is a loving homage to the wonderfully wacky Gold Key Star Trek comics of yesteryear, penciled and inked by the wonderful Gordon Purcell, with coloring provided by Jason Lewis. Star Trek: Waypoint #2 is slated for release on November 23rd, so start bugging your local comics dealer.

Planet of the Apes short story: Yep, this one. I delivered my manuscript for “Message In A Bottle” to my editors on March 7th. They were able to get their notes and comments back to me later that same week, which I quickly addressed so that they could get on with putting together the entire anthology for delivery to the good folks at Titan Books. As it uses the characters from the 1974 live-action TV series (for which I confess to having a soft spot), I think it does a good job reintroducing that aspect of the Apes mythos and providing something you might well have seen on the show had it not been cancelled. At last report, Fox had approved the book’s contents, and the book itself is now available for pre-order, with a scheduled publication date of January 24, 2017.

Planet of the Apes essay for Sequart: Those Sequart guys just never learn their lesson. This time, I wrote about the live-action Apes television series for a new collection of essays which will bear the rather snappy title Bright Eyes, Ape City: Examining the Planet of the Apes Mythos. I returned my copyedited essay to my editors back on April 16th, but I have no idea when we might see layout pages, and there’s been no word on a publication date. More info as details become available.

“Texas Pride”: During last year’s Kickstarter for friend Mike Friedman’s Pangaea anthology, there were a handful of stretch goals built into the funding campaign. One was a story bundle giveaway, and I offered to Mike this short story of mine that’s set in the “universe” of my novels The Last World War and Counterstrike: The Last World War – Book II. I wrote the story in 2007 for Amazon’s now-defunct “Amazon Shorts” program, and if you didn’t get it back then, or caught me at a convention where I had one of a very limited number of “chapbook” editions of the story, it’s been unavailable. The story has since been formatted as an e-Book, complete with a snazzy new cover by friend Aaron Rosenberg. It was first given to the Pangaea backers, but I plan to offer it for general sale sometime soon. Stay tuned!

Tie-In Project: What happens when you reach out to an editor with whom you’ve not corresponded in a while, about a project you thought was dead? Well, sometimes, you find out that editor has left the publishing company you were hoping to work with, but your email is answered by another editor who’s excited to “meet” you and wants to talk about your supposedly dead project. Then a week goes by and you’ve written a one-page concept document for said project, and it’s being submitted to the licensor for consideration. Can’t say jack about this one…even to report that it’s actually going ahead, but the fact that it went from “Dead” to “Submitting to Licensor” in a week after being in limbo for almost two years? I’ll take it! Stay tuned as details become available.

Original SF novel – : had started a while back, refreshed some older notes and added some new ones. I think I’m on to something, and I plan to approach at least one editor with it later this summer, once I get a synopsis/proposal where I want it to be.

Original e-Book concept: I’ve been pondering an idea for a new series – something akin to the “men’s adventure” style books I loved back in the 80s and 90s. It would be a setting for which I could write shorter tales – novellas, likely – for e-Book distribution. It would be something of an SF-ish/action bent, with (I hope) lots of humor. Not quite campy, but definitely lighter in tone. This is still very rough at the moment, but it’s something I’d really like to get into later this year.

“The Enterprise Job”: As 2014 marked the 50th anniversary of the building of the original Enterprise model, and with the recent unveiling of the newly restored model to the Milestones of Flight gallery at the National Air & Space Museum, one would think my window for doing anything with this story has finally closed. That said, I’ve given thought to incorporating all of these recent developments into a new revision of the story. I still have to figure out how best to get it set up for one of the e-Book venues like Smashwords or whatever, as well as making it available for print-on-demand. I know, I know…. “one of these days.”

Aloha, November, and away we go!