Just in time for the weekend, all minty fresh from my publisher this very morning and still marinating in that new car smell, we have the final, approved cover for Trial By Fire, my forthcoming 24 novel. Behold, yo: 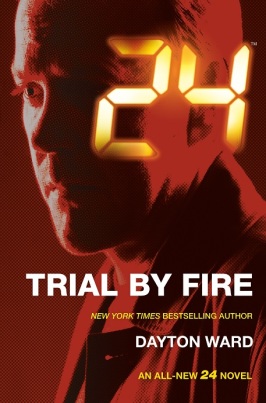 For those who may have missed this little bit of news: Unlike Tor’s previous two 24 novels (Deadline by James Swallow and Rogue by David Mack), which were set between the events of the TV series’ 8th season and the Live Another Day mini-series, Trial By Fire is a prequel, set several  years before the show’s first season.

And because my publisher is just that awesome, I can also offer a peek at the back cover, which has the complete cover copy, rather than the truncated version that has made it to sites like Amazon, etc. Check it out:

As you surely know by now, Trial By Fire is available for pre-order at all the cool bookstores. I prefer you frequent and support your local indie bookseller (I’m rather fond of Reader’s World in Lee’s Summit, MO, myself), but if that’s not an option, here are some pre-order links:

Trial By Fire will be comin’ at ya on or about Tuesday, August 23rd, and hey! Did you hear there’s going to be a new 24 TV series?