So, the other day I was asked via e-Mail about my forthcoming 24 novel Trial By Fire. Apparently, something purporting to be the book’s plot had been posted to the 24 Wiki site, and my e-Mailer wanted to know if it was legit.

After doing some digging to determine that a viable source exists for the info as presented on the Wiki page, I was able to confirm that this same info was starting to pop up in other places, including one of Tor/Forge’s spring catalogs. I then made double sure with my editor that it was okay to share here, and I’ve now gotten that green light, though with the caveat that the info I present here is subject to change and all that good stuff. 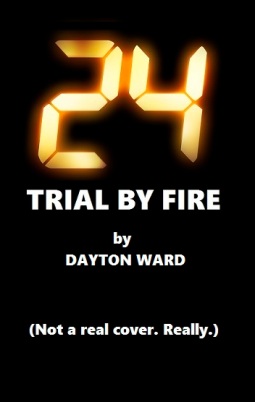 1994: Tateos Gadjoyan, an Armenian arms merchant, has been a target of the Central Intelligence Agency for years. Efforts to thwart his selling of American military weapons to terrorists and other enemies of the United States have been unsuccessful. Now, after months of careful planning, two undercover agents have infiltrated Gadjoyan’s inner circle. Soon, they will have sufficient evidence to seize the arms dealer and remove a clear and present danger to the United States.

On the small Japanese island of Okinawa, Gadjoyan’s representatives are concluding a deal with Miroji Jimura. Jimura’s hatred of Americans is absolute, and he’s only too happy to profit from sales of their own weapons to be used against them.

When a rival of Jimura’s sabotages the arms deal, one of the CIA’s undercover assets is killed, threatening the case against Gadjoyan and revealing a far greater menace to American security. The only thing standing against this new, immediate danger is a single, junior CIA agent named Jack Bauer.

The book has had an interesting development cycle. When I was first invited to write it, the plan was that I would follow the path already blazed by friends and fellow word pushers James Swallow and David Mack. They had already written novels (Deadline and Rogue, respectively) that take place during the four years that are said to have elapsed between the events of 24‘s eighth and final regular TV season and the Live Another Day mini-series. Mine also was expected to be set during that same four-year period.

After I submitted my outline and my editor in turn presented it to Fox, the folks in charge at that end of the connection came back with a new request: Make this one a prequel. Set it before everything that’s come before. Make Jack Bauer a more raw, inexperienced guy, during that period when he’s a CIA agent and before he joins CTU.

Hell, that sounded pretty damn fun. I was in.

I did counter-suggest that we not make him a totally green recruit sort of agent. After all, the series canon and other novels had established that Jack served in the Army’s Special Forces and as a cop for the LAPD before joining the Agency. He had skills and field experience, which likely aided him in landing with the CIA, so to me he was anything but “raw.” We navigated this point by determining that at the point my book was to be set, Jack was still learning the Agency ropes, working with a partner,  and so on, and then everything goes to hell on this particular undercover assignment.

The book is still on target to publish on August 23rd, and I’m actually addressing the copyedits as I share this with you. What’s that? You say you want to pre-order this bad boy? Well, get yourself to your nearest independent book seller and have them hook you up. If that’s not an option, then allow me to help you with some shameless links:

As a fan of 24 pretty much from the first minute of the first episode, I had a ball writing this thing. Here’s hoping it appeals to Jack Bauer fans everywhere.