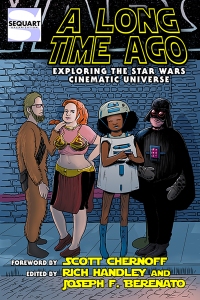 Because why not have a blog post title takes up the better part of two lines, amirite?

Though I knew this book was coming (hopefully) to capitalize on the Star Wars insanity which has gripped the known universe, what with The Force Awakens just over a month away from release, I didn’t know exactly when it might see publication. Well, BAM! Here it is. The Sequart Organization has announced that this bad boy is a real, honest to goodness book, and anyone and everyone who might want to check out their very own copy or perhaps buy eighteen or twenty of them for their friends and family are in luck, because it’s alive in the wild as of today.

I don’t want to steal too much of Sequart’s thunder, but I will go so far as to offer up the contributors to this latest Tome of Awesomeness. You may recognize at least a few names on this particular perp list:

For reasons that continue to surpass understanding, Sequart keeps inviting me back. I figure they’ll learn, sooner or later, but hopefully not before I can make off with some office supplies, or something. My contribution to this collection is titled, “Surrounding and Binding Us Together: Star Wars Across the Generations.” The essay was inspired by the fun I’ve been having with my daughters, the oldest of whom is just about the same age I was when I saw the first Star Wars film in 1977. We’re very much anticipating The Force Awakens, and this dad is particularly jazzed about taking his kids to see a brand new Star Wars movie the way it was meant to be seen.

A Long Time Ago: Exploring the Star Wars Cinematic Universe is now available from the usual haunts like Amazon.com, and your local Barnes & Noble, Books-A-Million, or independent book store can also order you a copy. In fact, go that latter route. Make an indie bookseller’s day, all right?

As always, special thanks to editors Rich Handley and Joe Berenato for inviting me along to play one more time. I’d have warned them about the dangers of continuing to include me in these things, but they’d already signed me for yet another essay by that point.

One thought on “A Long Time Ago: Exploring the Star Wars Cinematic Universe: It’s really a real book! Today!”