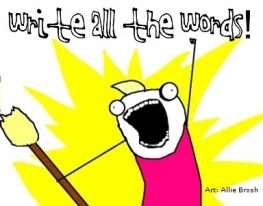 It’s a little insane, you know, how 2015 has screamed by so fast. Here we are into November. NaNoWriMo is in full swing, baseball season is over (Royals!), and even football season is half over. What the actual hell, people?

October was busy on a few fronts, and I’ll definitely be wrapping up the year in the fast lane, but I’m not complaining. There’s stuff to do, and stuff to plan. It’s gonna be fun.

For now, though? Here’s the October rundown:

Star Trek: Seekers #4 – All That’s Left – Hey! New book! Our latest edition to the Star Trek: Seekers series officially went on sale on October 27th. You bought copies for you and all your family and friends, right?

Planet of the Apes essay for Sequart – Those Sequart guys just never learn their lesson. This time, I wrote about the live-action Apes television series for a new collection of essays which will bear the rather snappy title Bright Eyes, Ape City: Examining the Planet of the Apes Mythos. I delivered my essay on October 30th, and early word is that at least one editor thinks it doesn’t suck. Go me! Now, I’m waiting for editor notes and all that.

Mars Attacks novella – This one quite literally came out of nowhere. I was contacted back on September 9th about my possible interest in writing this story, and I jumped at it. A manuscript was due on November 2nd, and I made sure it was in my editor’s mailbox first thing that morning. I’m staying busy with other stuff while awaiting editorial and licensor feedback. The plan is for the novella to be offered as a backers reward when Topps launches a Mars Attacks Kickstarter campaign, which should be announced soon.

Purgatory’s Key – Mine and Kevin’s contribution to Star Trek: Legacies, next year’s novel trilogy that will help to celebrate the 50th anniversary of the original Star Trek series. I’m using NaNoWriMo to push out a goodly portion of my writing duties on this book. We’re not free to really talk details on this one just yet, other than to say the trilogy is slated to publish in July, August, and September of next year.

“Day to Day” – Short Story for 2113: Stories Inspired By the Music of Rush, edited by John McFetridge and Kevin J. Anderson for publisher ECW. As the anthology title implies, each of the stories it contains will be inspired in some way by one of the songs in Rush’s extensive catalog. My story draws inspiration from the song “Red Sector A” from the band’s Grace Under Pressure album. We received galley pages last week that require our final once-over, and which are due back by November 9th. At last report, publication is set for April 12th, 2016.

24: Trial by Fire – I received editorial notes last week, but I had to set them aside while I finished the Mars Attacks novella and the Apes essay. I’m hoping to address all the notes and do a bit rewriting on a couple of scenes over the next week or so. I’m not at liberty to discuss details at this point, but I hope I can get some clearance to talk about it soon, because…well, dammit, Chloe! As of now, publication is set for next August.

Star Trek: A Travel Guide to Vulcan – An “inside the box” Star Trek book that mimics–more or less–something like the Lonely Planet series of travel guides. This will be published by Insight Editions, who’s built up a rep for creating a bunch of really impressive and shiny art and behind the scenes books for a number of entertainment properties. My manuscript was approved by both my editor and CBS, and the book is now deep into the art/layout stage. Insight has actual, talented people to do the heavy lifting for this part, but I’m still in the loop and trying to be…you know…helpful. It’s been a fascinating learning experience, so far. The book is currently slated to be published on April 16th, 2016. Stay tuned!

Elusive Salvation – A Star Trek original series novel that’s a sequel to From History’s Shadow. More UFOs! More aliens! More time travel shenanigans! At this time, I’m expecting the galley pages to show up any day, now. We’re still waiting on a cover reveal, but at least you can amuse yourself with the back cover copy. As From History’s Shadow‘s cover conjured 1950s UFO conspiracy vibes, this one also evokes the era in which much of the story takes place. I’m hoping I’ll be able to share that, soon. The book is currently slated for publication on or about April 26th, 2016.

“When It’s No Longer Fan Fiction“- My monthly contribution to the Novel Spaces blog, which was posted on October 17th. Prompted by the announced return of the Star Trek: Strange New Worlds writing contest, I took the opportunity to field a question I get on frequent occasions: What’s the difference between what I and other tie-in writers do, and fan fiction? Yep, the topic comes up pretty often.

“Surrounding Us and Binding Us Together: Star Wars Across the Generations” – Editors Rich Handley and Joseph F. Berenato have taken on the challenge of producing not one and not two but three collections of essays focusing on different aspects of the Star Wars franchise. My essay will be included in the first book, A Long Time Ago: Exploring the Star Wars Cinematic Universe. I delivered a revised manuscript in mid-July, and now we’re just waiting for final pages to review.

Planet of the Apes short story – Yeah, I’ve already yammered at length about this, so I’ll spare you the encore. As things stand now, my story isn’t due until the end of February, and as you’ve likely surmised by this point, I have plenty to keep me busy.

Headlong Flight – A Star Trek: The Next Generation novel set after the events of Armageddon’s Arrow as well as a new trilogy coming next year from fellow scribe John Jackson Miller. This new tale is intended to be another largely “standalone” story with an emphasis on exploring. I received word on August 28th that my outline had been approved by in-house editorial and CBS Licensing, so I’ll be diving into this one just as soon as I’m done with Purgatory’s Key. There may be even be a bit of overlap. The book is scheduled for some time in 2017, which happens to be the same year we’ll be observing the 30th anniversary of the TNG television series’ premiere. Don’t think that’s lost on me…. 🙂

“The Enterprise Job” – As 2014 marked the 50th anniversary of the building of the original Enterprise model, and with recent news that it will soon be moved to a more prominent location within the Air & Space Museum as well as possibly receiving a new restoration effort, I told myself that I have to get off my ass and get this finished, formatted, and made available for public consumption and ridicule. Of course, all of that news about the actual model made me rethink significant portions of my story. Once I address all of that, I still have to figure out how best to get it set up for one of the e-Book venues like Smashwords or whatever, as well as making it available for print-on-demand. I know, I know…”it’s coming.”

Original SF novel – Another idea that’s been picking up steam in recent weeks. I’ve revisited a file I had started a while back, refreshed some older notes and added some new ones. I think I may be onto something, and I plan to approach at least one editor with it later this summer, once I get a synopsis/proposal roughed out.

Tie-in project – For who knows? Believe it or not, I actually got this thing to a point where I was comfortable handing it off to another party for review. Why? Because this project, assuming it goes forward, will entail collaborating with an artist. The person I hope will be that artist is currently looking over the material, and if he decides he wants to play, then we’ll get going on finalizing the pitch and putting it in front of the “right people.” This would be for someone with whom I’ve not worked before, so I’m not sure at this point what to expect, but, I’m definitely jazzed to get this in front of someone, because FUN.

The Adventures of Space Marshal Dylan McCade: There has been some preliminary talk about a follow-up to “The Terror of Entropia’s Ice Cannon!” That first story ended on something of a cliffhanger, setting up something I was calling “The Rampage of the Runaway Moon!” and even though that originally was meant as a tongue-in-cheek salute to Space: 1999, it’s looking like we may well go for developing this notion. The current plan is to collaborate on a story outline, and from there decide how best to proceed. In the meantime, the first adventure is still available for listening and reading at the Dylan McCade’s page on the SciFi Commons website, and it’s all free for your ears and eyes alike. So, if you haven’t yet sampled it, you need to be setting course thataway. I’ll wait.

Short film script: Kevin and I hatched this notion a while were talking about some other things. Now that Kevin has experience writing scripts and access to people and resources looking and willing to film such things, we decided we may have the makings of a fun little project. I also have the idea pretty much written out, already, so it’ll largely be a matter of going in and rewriting/freshening up some bits, formatting a 10-15 minute screenplay from that, and then seeing what the next steps are. Mwuah-ah-hah.

Military SF story – A while back, I received a copy of a military SF short fiction anthology – the first in what is to be a recurring series of such books – along with a  handwritten note from its editor that read, “Volume 2 is done. Now send me something for Volume 3!” Well, Volume 3 has come and gone, but I still really want to write something for this series. Maybe once I get past some of this other stuff….

Kid’s story book – Though my original idea (an illustrated story book for younger kids…5-8 range, etc.) might not end up going anywhere, a recent discussion has opened a door to possibly getting this going as part of another, larger project. This would be a licensed product, and things are still very nebulous at the moment as different parties weigh in on this or that, but you can be sure that if anything breaks, I’ll be one jazzed geek.