This past Thursday evening, the family and I ventured to the Sprint Center here in Kansas City to take in yet another concert featuring my favorite band.

What made this outing special was that it was the first ever *real* rock concert for the girls. I had long hoped that I would get to take them to see the band play live, and in doing so set the bar high and early so far as future concerts were concerned. It was something I’d been plotting pretty much from the moment Michi showed me that first pregnancy test. 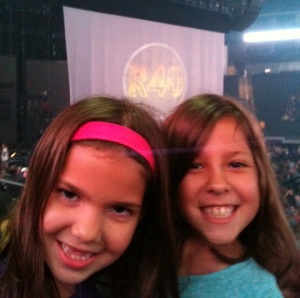 With that addressed, what was my second favorite part of this story? It was the one I didn’t even know about until a friend on Facebook sent me a link to website article:

That’s right! One of Kansas’ most renowned exports decided to check out the haps in downtown KC, and as you might expect, they were their usual warm, welcoming, loving selves, in keeping with the teachings of the Lord and stuff.

For the most part, their antics were ignored. As I said, I didn’t even know they were there, as we’d entered the Center from its opposite side one block over. However, that didn’t stop a few fans from doing their part to welcome the WBC contingent:

(And the expression from the WBCer on the left is priceless.)

I have to say, though, that I admire the WBC’s pluck in turning out for the concert. Their numbers were easily double what I’ve seen when I’ve encountered them at other events, such as anytime Kevin Smith comes to town. I doubt they converted anybody, but it’s nice to know that you can always count on them to provide a pre-show laugh or two.

8 thoughts on “My second favorite “Rush in Kansas City!” story.”