I can’t wait to see the look on the bartender’s face the first time I’m there to watch someone order one of these.

I’ll admit that the beer described in the article sounds rather tasty, and I’m kinda keen to try it. I’m sure this particular flavor/blend/whatever is available under some other label, but it’ll be a new one for me.

One. Six. Whatever. Don’t judge me. SHUT UP.

I saw this a couple of times in my Facebook feed earlier today. As some hard core fans rightly pointed out, “Klingon Warnog” really isn’t “the first Star Trek-themed beer to hit the US.” That supposed honor actually goes to the infamous “Romulan Ale,” a rather putrid concoction memorable mostly for the fact that it turned your teeth and urine blue. It was available at the late and very much lamented Star Trek: The Experience attraction in Las Vegas, where you could get it by the glass at Quark’s Bar or even buy some to take home with you. 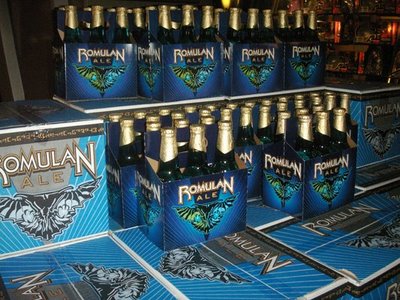 (Note: The Romulan Ale beer, as bad as it was, shouldn’t be confused with the energy drink of the same name, because holy shit…was that it’s own kind of nasty.)

According to this news report, “Klingon Warnog” will make its debut tomorrow night at the Nightclub & Bar show in Las Vegas (and why wasn’t I invited to that?), and will be available for sale throughout the US and Canada later this year.

Note to CBS Consumer Products: I’m available for all taste-testing of themed alcoholic beverages. No, really. Call me.

(I sense a story idea coming on…a rogue pilot and his unlikely partner take a bet from an Orion merchant to cross into Klingon territory and bring back 400 cases of Warnog in 28 hours. Neutral Zone-bound and down, yo.)

If you’d like to learn more about Klingon Warnog and the previous Trek-themed offering, “Vulcan Ale” (currently available in Canada), check out the page devoted to both: Federation of Beer!

Note to Self: Get a job with these folks.

It seems today is a good day to drink, after all. Yesterday wasn’t bad, either, and tomorrow’s looking pretty damned good. Qapla’!