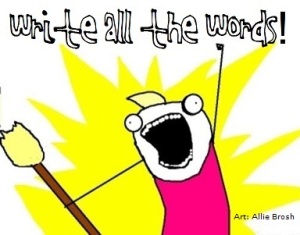 Some of you probably know that a good portion of February was spent preparing for The Big Move. Indeed, this is the first writing wrap-up coming to you from my home office at the newly christened Ward Manor 2.0. Boxes of books and whatnot remain scattered to and fro, and I suspect I’ll be spending this, the first truly uninterrupted day since we moved in, cleaning up the book bomb that’s exploded around me.

As for writing, it was a pretty light month (see above), but I’ve got some things to accomplish here in the next couple of weeks as I get back on track. With that in mind, here’s the February rundown:

Star Trek: Seekers #2 – We delivered our manuscript for Point of Divergence on February 6th. We’ve received a few notes from the editor as well as from our co-conspirator, David Mack, which I’m planning to address in the next week or so while we wait for a copyedited manuscript to make its way back to us. The first two Seekers novels will be published in August and September, and while I’m pretty sure Dave’s book, Second Nature, will have something of a “premiere” at this year’s Shore Leave convention, it’s way too early to tell if we might get lucky with some copies of our book. More details as details firm up.

Pale Blue Dot – This is the title they stuck on the contract for my next tie-in novel project, pending my coming up with something better. I signed those contracts back in January and I received back a copy of the executed agreement and the first portion of my advance, so I suppose it’s safe to say at this point that it will be a Star Trek: The Next Generation novel, set after the events of The Fall. Basically, everything I set up at the end of Peaceable Kingdoms to give the next writer in line something of a clean slate? Yeah, that “next writer” turned out to be me. If I’d known this while writing that book, I’d have set things up differently, with Picard and Chen going off to open a private detective agency on Wrigley’s Pleasure Planet, or something. As it happens, the Enterprise-E is now heading out into “the unknown” for some good old-fashioned seeking out of new life and new civilizations and whatnot. Live and learn, I guess. Anyway, my outline for this thing is due to my editor on or about March 17th, with a projected manuscript delivery around Labor Day, and publication at some point in mid 2015 or so. Once I figure out what the book will be about, I’ll let you know.

Essay – my contribution to New Life and New Civilizations: Exploring Star Trek Comics, which will be published by the Sequart Organization. As the title implies, this collection of essays will take a look at all the various Star Trek comics which have been published over the years, from Gold Key’s original run in the 1960s all the way up to and including IDW’s current line of monthly and special event titles. For those wondering, my piece will revisit Marvel’s second run of Trek comics from the late 1990s. I received word on December 23rd that with the exception of a few line edit tweaks, my editor was pleased with what I’d delivered. The book is scheduled for a 2014 publication, and Editor Joe has already said he’s busting various body parts in an effort to have copies on hand for the aforementioned Shore Leave convention. Can’t wait to see this one!

“Inspired By Your Surroundings.” – My most recent monthly column for the Novel Spaces blog, which was posted on February 15th. This time around, I babble a bit about favorite places that inspire me in my writing, in particular Union Station right here in Kansas City. I once wrote a story set there, and did so while sitting at a café right there smack in the middle of it all. It’s still my favorite building in the city.

The Adventures of Space Marshal Dylan McCade: There has been some preliminary talk about a follow-up to “The Terror of Entropia’s Ice Cannon!” That first story ended on something of a cliffhanger, setting up something I was calling “The Rampage of the Runaway Moon!” and even though that originally was meant as a tongue-in-cheek salute to Space: 1999, it’s looking like we may well go for developing this notion. The current plan is to collaborate on a story outline, and from there decide how best to proceed. In the meantime, the first adventure is still available for listening and reading at the Dylan McCade’s page on the SciFi Commons website, and it’s all free for your ears and eyes alike. So, if you haven’t yet sampled it, you need to be setting course thataway. I’ll wait.

Tie-in novel – For late 2015. This hasn’t been much more than a “Do you want to write _____?” “Yes. Yes, I do.” sort of conversation at this point, but it’s at least on my radar screen. I may see contracts for this in the next couple of months, but until then? I think I can find something to keep me busy.

Tie-in project – For who knows? Kevin and I originally cooked up this notion while we were in Vegas back in August. After some himming and hawing, we finally put together a pitch/outline and delivered it for review earlier in December. The feedback we’ve gotten so far is that it’s an idea they want to pursue, but not just yet. We may hear something more in the next couple of months, but the beauty of what we pitched is that it’s not time-sensitive, so it can sit and percolate while we tend to other things. Stay tuned.

Another tie-in project – For who knows? The pitch for this is open this morning, waiting for me to tie off the few remaining loose ends and get it out of the way before I dig into the new novel outline. After that, I plan to send it to a small group of trusted folks to get their feedback, after which I will be sending it to someone at a publisher who hopefully won’t toss it in the recycle bin. This would be for someone with whom I’ve not worked before, so I’m not sure at this point what to expect, but, I’m definitely jazzed to get this in front of someone.

“The Enterprise Job” – Realizing over the holidays that 2014 marks the 50th anniversary of the building of the original Enterprise model, I told myself that I have to get off my ass and get this finished, formatted, and made available for public consumption and ridicule. This means figuring out how best to get it set up for one of the e-Book venues like Smashwords or whatever, as well as making it available for print-on-demand. I know, I know…”it’s coming.”

Short film script: Kevin and I hatched this notion back in December, as a matter of fact. 2014 also marks another milestone year in the annals of Star Trek history, and as we were talking about some other things we plan to be doing at the forthcoming Starfest convention in Denver, this other idea presented itself. Now that Kevin has experience writing scripts and access to people and resources looking and willing to film such things, we decided we may have the makings of a fun little project. I also have the idea pretty much written out, already, so it’ll largely be a matter of going in and rewriting/freshening up some bits, formatting a 10-15 minute screenplay from that, and then seeing what the next steps are. Mwuah-ah-hah.

Also, and though we’ve been on a brief hiatus these last couple of weeks, I’ve continued to answer the call of friends Nick Minecci and Terry Lynn Shull, they of the weekly Sunday G and T Show, responding to queries submitted to them via their show’s “Ask Dayton” feature. What can I say? I’m a glutton for punishment. Besides, we’re almost at 100 of these frappin’ things, so I can’t stop now.

Military SF story – A few months ago, I received a copy of a military SF short fiction anthology – the first in what is to be a recurring series of such books – along with a  handwritten note from its editor that read, “Volume 2 is done. Now send me something for Volume 3!” So, you know…I should probably do something about that. I’ve got a couple of ideas percolating, so hopefully I can get on that before things get too crazy with the next novel project.

Kid’s story book – Though my original idea (an illustrated story book for younger kids…5-8 range, etc.) might not end up going anywhere, a recent discussion has opened a door to possibly getting this going as part of another, larger project. This would be a licensed product, and things are still very nebulous at the moment as different parties weigh in on this or that, but you can be sure that if anything breaks, I’ll be one jazzed geek.

Steampunk short story – I plan to get back to this one and finish a draft, but I don’t expect it will be happening until after the first of the year. It’s a new genre for me, so it’s proving a bit of a challenge, but I really like the idea I’ve come up with. I’m even thinking I can expand the general premise–if not this particular tale–to novel length, and really go crazy. I guess we’ll see.

March also will see be attending my first convention of the year, Planet Comicon, and it’s also my anniversary month. And the new outline will be due, and all of that happens in the same 3-4 day period. So, you know…I’ll be kinda busy.

One thought on “February writing wrap-up.”

You've been warned. No whining.