Saw this on Facebook this morning, thanks to friends and fellow word pushers Keith DeCandido and Greg Cox: Ian Coomber over at WhatCulture.com has taken a broad look at the nearly 50-year history of Star Trek tie-in publishing and come up with a list of ten benchmark books which show the evolution of Star Trek fiction over the decades.

(Note to self: This would’ve made a great topic for a future “Ten for Ward” column. You snooze, you lose, yo.) 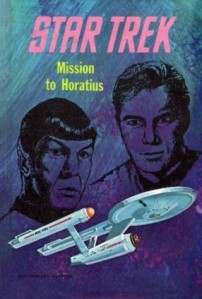 From its humble beginnings as a series of short story-esque episode adaptations and a lone “children’s book” to a catalog which can fill an entire room (or at least a significant portion of one, in my case),  Star Trek novels have had their share of “moments” that upped the ante so far as what could be done with the medium.

With crossover events, or books that carry stories forward after a television or film series has ended its run, and even introducing all-new characters and series which never appeared on-screen, Star Trek in particular has been there and done that. A lot.

For those who don’t do linky things, here’s the list of Ian’s 10 “milestone” Star Trek novels:

#4: The Eugenics Wars: The Rise and Fall of Khan Noonien Singh – Greg Cox

However, I highly encourage you to read the original article, as his reasons for including a particular title are pretty gosh-darned sound.

There are a few minor quibbles with respect to flubbing some historical points regarding Trek publishing as a whole, but they’re easily overlooked. Also, we’re not talking about the quality of a particular book, or why this book was included over that book, and so on and so forth.

The emphasis here is on what a given title offered or demonstrated so far as what’s possible with a tie-in book and – in several cases – what it contributed to the larger community of Star Trek novels. On this count, I think Ian did a fine job making his case.

2 thoughts on ““10 Milestone Star Trek Novels,” over at WhatCulture.com”