Over the course of the past year or so, I’ve been interviewed a few times by Sina Alvarado and Michael Clark over at Trek Mate for a couple of their podcasts. Two of the interviews dealt specifically with my writing (see here and here), while the third get-together was for one of their other features, “Desert Island Trek,” where they bring in a guest to discuss the five Star Trek episodes they’d want to have with them should they find themselves marooned on a…wait for it…desert island.

“Hmm,” I can hear someone thinking, “if Trek Mate has a show devoted to a guest’s favorite or ‘best’ Star Trek episodes, I wonder if they have something for the opposite end of the spectrum?”

Well, of course they do.

For my latest sit-down with Trek Mate, I am the guinea pig for a new installment of their “Shipwreck Trek” series, in which I offer up five Star Trek episodes I’d like to see abandoned on some far off island or atoll, preferably in the last minutes before that area is subjected to some sort of nuclear testing.

For this little slice of hell, Sina is joined by fellow Trek Mate podcaster Chris Mitchell and Jarman Day-Bohn, who are forced to endure the list of five horrific Star Trek episodes I foist upon them. Which ones did I offer up? Well, I don’t want to give away the entire list, but here’s a hint: 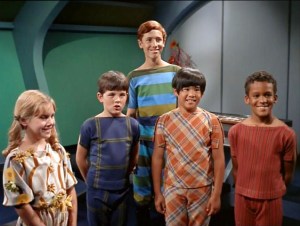 Make sure you’re medicated before embarking on this bit of audio torture. I’m told that interrogation experts are already modifying their procedures to include forced watching of these episodes, Ludovico Style, if you know what I mean.

Have a listen, if you dare: Ten Forward Episode 74 – And Liberace Shall Lead

Don’t say I didn’t warn you.

Thanks to Sina, Chris, and Jarman for having me on the show again. Hopefully the next time we get together, it will be for something that doesn’t make us all want to gouge out our eyes.