This was a little surprise that crossed my radar screen yesterday. Apparently, Pocket Books has decided to start collecting different Star Trek novels into e-Book omnibus editions. Among the initial offerings will be David Mack‘s Star Trek: Destiny trilogy in a single edition, and three recent Star Trek: Typhon Pact novels–Plagues of Night and Raise the Dawn by David R. George III, and Brinkmanship by Una McCormack–under the umbrella title The Khitomer Accords Saga. Mr. Mack’s trilogy is, essentially, the launching point for the current state of Star Trek novel continuity in the 24th century, whereas the second trio of books are good primers for The Fall, a five-book event coming later in 2013. 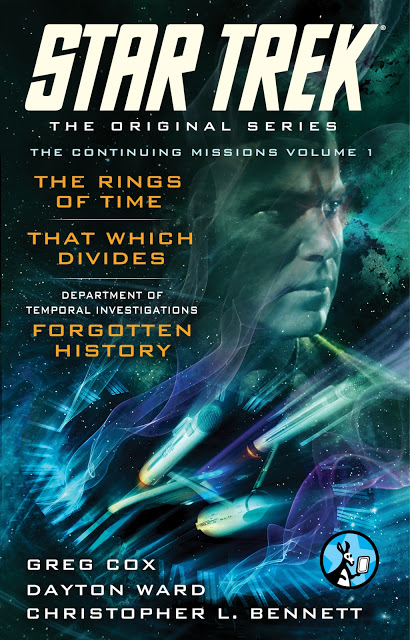 Yep, this looks to be the first in a recurring series of collections featuring stories with Kirk and the gang from the original Enterprise. For those not in the know, these three novels all were published earlier this year, and all “star” the original series crew from the “five year mission” era. I had no idea this was coming until I saw a report posted over at The Trek Collective (and thanks to 8of5 for the heads-up!), and I’m certainly very cool with the notion of That Which Divides being omnibusified with works by friends Greg Cox and Christopher Bennett.

Shut up. “Omnibusified” is too a word. Yuh huh!

Anyhoo, according to The Trek Collective’s report, this omnibusified (See? Right there!) edition will be available for download to your gadget du jour on January 29th, 2013. Of course, if you’ve already bought one or more of the titles in their original paperback or e-Book editions, this has little to no appeal, but I’ll pretend not to notice your indifference. On the other hand, if all three of these books (Even mine? :: gasp! ::) are new to you, this might be one way to get them all in one go.

For those who might ask, I have no info on any possible print edition of In Tempest’s Wake. That’s a different set of considerations than for what’s going on here, but never say never, and all that.

10 thoughts on “That Which Divides…also gets collected.”