Earlier this year, I had the pleasure of being interviewed by Christopher Jones over at Trek.fm. During that conversation, we discussed That Which Divides, which at the time was still minty-fresh, along with a few other Trek and writing-related topics. 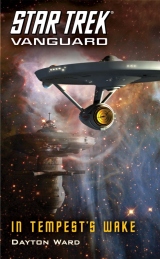 Now, Christopher and his partner in crime, Matthew Rushing, have launched a new podcast under the Trek.fm banner, called Literary Treks. Their aim with this show is to turn the spotlight on the various Star Trek fiction, be they novels, comics, and so on. I was asked to be a part of their inaugural installment, and over the course of an hour or so we talk about my recently published novella In Tempest’s Wake as well as my experiences writing and collaborating for the Star Trek: Vanguard novel series. As you may recall, I have something of a soft spot for those books.

We also cover ground in a couple of other areas, such as my ongoing desire to write Captain Proton stories, collaboration in general, other projects I have in the hopper, and what I like to read for fun when I’m not writing, working, or otherwise comatose.

It was a fun discussion, the first of what I hope will be many with Christopher and Matthew. Literary Treks already has lined up a similar interview with pal o’ mine and current Star Trek: Voyager novel-master Kirsten Beyer, with still others waiting in the wings. So, before they get on with talking to those far more interesting people, you’ll have to settle for me:

Trek.fm: Literary Treks – In Tempest’s Wake and the Development of Vanguard.

Many thanks to Christopher and Matthew for having me on!

6 thoughts on “Talking Vanguard, Captain Proton, and whatever over at Trek.fm!”