Something like this might well have happened, if I’d been..oh…twelve or so years older on that one wondrous day.

ONE DAY
by
Dayton Ward

“Will you stop looking at the house? He said he’d call us.”

Jimmy Warner scowled at his sister. “What if he forgets?”

Rolling her eyes, Michelle replied, “Oh, right. As if you’d let him Mister ‘I want to be a space man.’ Sheesh!” She was only twelve; two years younger than Jimmy, and therefore incapable of understanding just how important this day was to him.

For as long as he could remember, Jimmy had dreamed about one thing: flying in space like the men in the movies and on television. The walls of his room where covered with various pictures and star maps he’d cut from magazines. More than once, he’d talked his mother into letting him stay up late on school nights so that he could sit in the back yard with his telescope and stare into the Kansas sky, studying the stars. A constant diet of movies and tales of science fiction magazines fueled his imagination.

Jimmy picked up a torn, stained softball which was a favorite toy of the family dog. “Here, Gunner! Get it!” he shouted as he pitched it into the field behind the barn. No sooner did Gunner lunge after it than Jimmy heard the call for which he’d been waiting all afternoon.

“Kids!” came his father’s voice from where he stood on the house’s front porch. “It’s on!”

“Come on, let’s go!” Jimmy yelled, sprinting toward the house with Gunner in hot pursuit.

Michelle called out, “Hey! Wait for me!”

Bounding onto the porch, Jimmy barely avoided running into his father’s legs as he darted into the house and straight into the family room where the television sat. Seeing the fuzzy picture on the screen, he moved to adjust the TV’s antenna

Jimmy plopped down in front of the television and crossed his legs. Then, before his father could tell him to do so, he scooted back so as not to be sitting too close to the set. Michelle, still breathing hard from her run across the yard, dropped down onto the rug next to him, lying on her stomach and propping herself on her elbows.

“Shhh!” Jimmy snapped, his eyes locked on the TV. On the screen was a large room that he knew was “Mission Control” down in Houston, Texas. Rows of consoles dominated the room, each with their own phones, keyboards, and other things Jimmy couldn’t name. Screens flickered, lights blinked, and dials moved. While many of the men sitting at those stations were staring intently at the screens in front of them, Jimmy could see that several people were staring at something happening off-camera.

The image changed to that of a man, dressed in a dark suit and holding a microphone, looking out at Jimmy from the screen. “We now take you live to the cockpit of the Apollo 11 landing craft, and the voice of Neil Armstrong.” The picture changed again. It was now mostly black, but the lower left portion of the screen showed a blurry, moving gray field. Jimmy realized the camera was pointing directly out the window of the lunar module being flown by Neil Armstrong and Buzz Aldrin. He could hear a quiet male voice that he thought might be Aldrin’s reciting a bunch of numbers and other stuff he did not understand.

“That’s the moon!” Jimmy yelled, pointing at the TV. The gray area was rapidly looming closer. Though Jimmy’s family owned a color television, the image now being shown was black and white, and the picture was very blurry.

“Why’s it so fuzzy?” Michelle asked.

Their father answered, “Maybe because they’re so far away? How far away are they, anyway?”

Jimmy could see craters now, along with rocks and other land features as the moon’s surface seemed to rush up toward them. Then, the image jumped before all motion on the screen seemed to stop.

“They did it!” Jimmy shouted, barely able to sit still on the rug.

“Houston, Tranquility Base here,” said the voice Jimmy now recognized as belonging to Armstrong. “The Eagle has landed.”

Jimmy awoke to feel a hand on his shoulder. Blinking as he sat up, he realized he had been sleeping in the center of the family room, and he turned to look up into the eyes of his mother.

“What’s going on?” He reached up to rub the grit from his eyes before looking to the clock mounted on the wall behind the television. It was almost ten o’clock!

His mother smiled before pointing past him to the TV. “You don’t want to miss it, do you?” To his surprise, Michelle was still sitting on the rug next to him, a bowl of popcorn resting in her lap. Had she been awake this whole time?

“You almost slept through the best part!” she said, around a mouthful of popcorn.

Looking to the television, Jimmy was able to see the grainy, black and white image on the screen. The upper half of the picture was almost black, with the bottom portion covered by what looked like a curving, white-gray beach. Closer to the camera was a figure, clothed in a bulky white suit with a huge white helmet and a large, square backpack standing on what looked to be a ladder. It took Jimmy an extra few seconds to realize that he was seeing an astronaut, making his way out of the lunar lander!

A voice said, “Okay, Neil, we can see you coming down the ladder now.”

“This is it!” Jimmy said, forgetting Michelle and the popcorn and moving closer to the television.

“Leave him be,” countered his mother.

Ignoring whatever else they might be saying, Jimmy instead focused on the grainy, flickering television picture and the voices talking to each other while separated by hundreds of thousands of miles. Then, after what seemed like forever, he heard a sharp beep, followed by the muffled, distant voice of Neil Armstrong.

The bulky figure on the screen, with one hand holding onto the ladder attached to the lunar lander, moved to his left and seemed to drop down. After a long pause, Armstrong spoke again.

“That’s one small step for man…one giant leap for mankind.”

Even as the astronaut’s words traveled back to Earth and were broadcast to everyone currently watching this historic event, big white letters appeared on the television screen: “FIRST LIVE PICTURES FROM MOON.”

“They did it!” Jimmy said, jumping to his feet. “They made it!” Turning to his father, he smiled. “I told you they’d do it!”

His father returned the smile. “Yep, you told me, all right.” Nodding toward the television, where Armstrong was describing how his footprints were easily visible in the moon’s fine, powdery surface. “Think you’ll make it there yourself, one day?”

Unable to control his grin, Jimmy nodded. “I’ll get there. You’ll see!” Gripped by a sudden idea, Jimmy turned and ran from the family room. Making sure all the outside lights were turned off, he bolted through the back door and into the yard where he’d set up his telescope after finishing dinner. It was there, aiming toward the night sky, and as he moved behind it he adjusted it so that it aimed once more at the moon. His hands shook as he realized that for the first time, at this very moment, he would be looking up at the moon while a man walked upon its surface. There was no way to see Neil Armstrong, of course, but even as the moon filled the telescope’s viewfinder, he could imagine the man making those first steps, and even wonder what it might be like to walk beside him.

So intent was he on the telescope and the moon that Jimmy did not hear anyone walking toward him until he felt a tap on his shoulder. Turning from the eyepiece, he saw Michelle standing nearby, staring at him with wide eyes.

“Maybe I want to go there one day, too.”

Smiling, Jimmy stepped back from the telescope, and let his sister have a look. 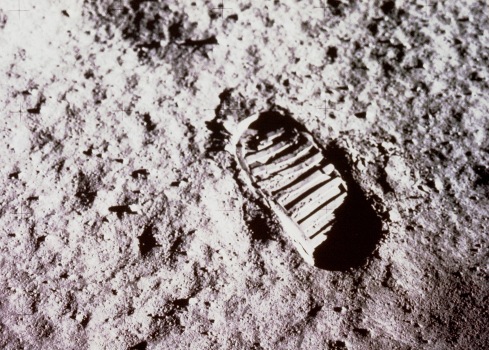 Thank you, Mr. Armstrong, for inspiring countless young girls and boys every day since you took that one small step. May we make yet more giant leaps, following your footprints as we travel toward paths not yet taken.