Technically, this book isn’t even supposed to be available until late September or so, but I scored an autographed copy at Comic-Con last month, so I’m feelin’ a bit braggardly.

So, how many people know Mars Attacks as anything other than that Tim Burton flick? The movie was based on the classic 1962 card series from Topps, which celebrates its 50th anniversary this year. Because of that rather swank milestone, Topps and various tie-in licensees are pulling out all the stops to commemorate the card series. Topps is re-releasing the card set, as well as the “sequel” set which came out in 1994. IDW has launched an all-new monthly comic which serves as a sequel to the cards’ original storyline. And then there’s this sweet little tome from Abrams Books: 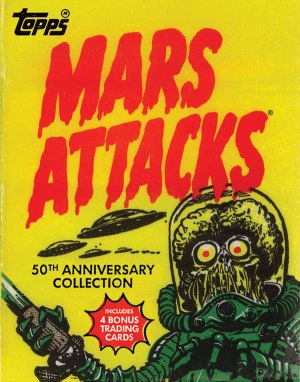 Essentially, it’s the card set presented in book form. Each card from the original 55-card set gets blown up to about 150% size, and each facing page contains the text from the back of the card, so you can read that segment of the storyline while eye-balling the art. The book also contains a special introduction by series co-creator Len Brown, and an afterward by Zina Saunders, daughter of Brown’s collaborator and the original artist, Norm Saunders. Brown also provides “commentary” on every card, offering anecdotes about how a particular image came about, or aspects regarding the production of the series. His introduction provides a detailed history of the series’ development, as well as all the obstacles they encountered when the cards started selling and people began complaining about its “subversive” nature.

What? Subversive? Surely, you jest…

Attention also is paid to the sequel series from 1994, as well a host of concept sketches, unused art, tribute art, and a look at various tie-ins to come along over the years. There are even 4 all-new cards included in the back, just ‘cuz. The hardcover book is emblazoned with a picture to resemble a stick of that old nasty, crunchy gum which used to get included with packs of cards, and the dust jacket looks just like one of the card wrappers. It’s even made from the same wax paper. You can almost smell the bubble gum.

Never widely distributed due to the controversy it caused during its initial release, the Mars Attacks cards had already long ago come and gone by the time I was old enough to start collecting any sort of trading cards. I was aware of them, but only really got into them when the set was re-released. Over the years, the series has become one of my favorite bits of pulpy SF fun, so this book is a perfect addition to my rather bloated library, and at right around $20? It’s a steal.

Of course, yours won’t be autographed by Len Brown, like mine is, but don’t let that stop ya. Get yours, before the Martians get you.