Earlier this week, friend, fellow word slinger, and our main co-conspirator for the Star Trek: Vanguard series, David Mack, posted the cover art and copy for what will be the series’ final installment, Storming Heaven:

“I WAS THERE UNTIL THE END, MATE.
THE BITTER, BLOODY END.” 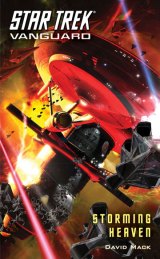 Vanguard is under siege. Surrounded by enemies, Admiral Nogura sends the scout ship Sagittarius to find an ancient weapon that might be the Federation’s only hope of stopping the alien threat known as the Shedai.

Qo’noS is wracked by scandal. Councillor Gorkon fights to expose a Romulan plot to corrupt members of the Klingon High Council, only to learn the hard way that crusaders have few allies and even fewer friends.

Tholia teeters on the brink of madness. To prevent Starfleet from wielding the Shedai’s power as its own, the Tholians deploy an armada with one mission: Kill the Shedai — by destroying Vanguard.

As stated in his blog entry from earlier this week, Dave promises to offer some choice tidbits from behind the scenes of the series throughout its development and evolution over the years. With that in mind, I figured now is as good a time as any to offer a “one-stop” info (and shopping!) guide for the series. So…you know…voila!

STAR TREK: VANGUARD
A Guide to the Books

Vanguard is an epic-scale Star Trek adventure set circa the time of Captain James Kirk’s original five-year mission (2265-2270). It’s the story of Starbase 47, also known as Vanguard station, a major Starfleet outpost, just outside Federation territory, whose official mission is to oversee the exploration and colonization of a vast region of space known as the Taurus Reach, more than 200 light years from Earth. It’s also the story of the starships that are detailed to the region as Vanguard’s exploratory eyes and ears.

In the course of this mission, the Vanguard team chases down an ancient mystery and unearth’s evidence of a fallen civilization. These discoveries subsequently encourage the Federation’s push into the region. The mystery is explained in broad strokes during the first story, and its effects on local politics and our characters’ lives will be ongoing.

The series consists of the following books:

Returning from its historic first voyage to the edge of the galaxy, the damaged U.S.S. Enterprise journeys through the Taurus Reach, a vast and little—known region of space in which a new starbase has been unexpectedly established. Puzzled by the Federation’s interest in an area so far from its borders and so near the xenophobic Tholian Assembly, Captain James T. Kirk orders the Enterprise to put in for repairs at the new space station: Starbase 47, also known as Vanguard.

As Kirk ponders the mystery of the enormous base, he begins to suspect that there is much more to Vanguard than meets the eye. It’s a suspicion shared by the Tholians, the Orions, and the Klingon Empire, each of whom believes that there are less than benign motives behind the Federation’s sudden and unexplained desire to explore and colonize the Taurus Reach.

But when a calamity deep within the Reach threatens to compromise Starfleet’s continued presence in the region, Kirk, Spock, and several key specialists from the Enterprise must assist Vanguard’s crew in investigating the cause of the disaster and containing the damage. In the process, they learn the true purpose behind the creation of Vanguard, and what the outcome of its mission may mean for life throughout that part of the galaxy.

The Taurus Reach: a remote interstellar expanse that holds a very old and potentially cataclysmic secret, the truth of which is feared by the Tholians, coveted by the Klingons, and dubiously guarded by the Federation. At the center of this intrigue is Vanguard, a Federation starbase populated by an eclectic mix of Starfleet officers and civilians, whose lives are forever altered as they explore the layers of mystery surrounding the Reach and steadily peel them away…one after another.

In the aftermath of Harbinger, Commodore Diego Reyes commands Vanguard while waging an intensely personal struggle, tasked to uncover the true significance of the Taurus Reach while simultaneously concealing that mission from his fellow officers – and even his closest friends. As the Daedalus-class U.S.S. Lovell brings some of Starfleet’s keenest technical minds to help, the U.S.S. Endeavour makes a find that could shed further light on the enigmatic meta-genome that has captured the Federation’s interest – if its crew survives the discovery…

Deep within the Taurus Reach, an ancient and powerful alien mind has awakened prematurely from aeons of hibernation, alerted to the upstart civilizations now daring to encroach upon the worlds in her care. With the stakes for all sides escalating rapidly, the alien lashes out with deadly force against the interlopers, propelling the Vanguard crew on a desperate race to understand the nature of the attacker, and to prevent the Taurus Reach from becoming a war zone.

Ancient secrets lie on the fourth planet of the Jinoteur system, and three great rivals are fighting to control it. The Federation and the Klingon Empire want to wield its power; the Tholian Assembly wants to bury it.

But the threat stirring on that distant world is more dangerous than they realize. The Shedai, who ruled the Taurus Reach aeons ago, have risen from their ages of deathlike slumber — to gather, marshal their strength, and take their revenge.

To keep Jinoteur from falling into enemy hands, the crews of Starbase Vanguard and the U.S.S. Sagittarius must risk everything: friends…loved ones…their own lives. But the sacrifices they make may prove too terrible for them to bear.

The Taurus Reach is in turmoil.

With tensions mounting between the Federation and the Klingon Empire, Ambassador Jetanien works frantically on Starbase Vanguard to halt the escalation toward war. Commodore Diego Reyes, the station’s former commander, awaits trial for treason, while the shattered mind of his intelligence officer, T’Prynn, becomes the battlefield in a fight for her very life.

But even as matters deteriorate, the discoveries made in the Taurus Reach have attracted one of the Federation’s most promising scientific minds: Dr. Carol Marcus believes she is close to solving a puzzle that will transform her life’s work. Meanwhile, an unexpected defection brings a new perspective to the investigation, and Vanguard’s Lieutenant Ming Xiong is confronted with an artifact that could be the key to decoding the Taurus Meta-Genome.

With Operation: Vanguard teetering between its greatest breakthrough and a conflict that could engulf two quadrants, its future may depend on the man Starfleet has selected to replace Reyes as base commander: Admiral Heihachiro Nogura.

Operation Vanguard is in chaos.

On a post-apocalyptic world in the Taurus Reach, undercover Starfleet Intelligence agent Cervantes Quinn finds an ancient Shedai conduit. Unfortunately, the Klingons have found it first and sent an army to claim it.

Light-years away on Vulcan, reporter Tim Pennington answers a cryptic call for help and ends up stalking interstellar criminals with an unlikely partner: T’Prynn, the woman who sabotaged his career and is now a fugitive from justice.

Meanwhile, Diego Reyes, former commander of Starbase 47, lives as a prisoner aboard a Klingon starship. But his former enemies aren’t seeking revenge. In fact, the only man who knows why Reyes is still alive is the one who arranged his kidnapping and faked his death — the enigmatic Councilor Gorkon.

All their fates, as well as the futures of three great powers, are linked by one thing: the mysterious Mirdonyae Artifact. And unless Doctor Carol Marcus and Ming Xiong can unlock its secrets in time, it might destroy them all.

The Taurus Reach: the source of a secret that has driven the great powers of the 23rd Century to risk everything in the race to control it. Now four new adventures—previously untold tales of the past and present, with hints of what it is yet to come—begin the next great phase in the Vanguard saga.

Witness the dawn of Starbase 47, as Ambassador Jetanien faces choices that will shape the future of Operation Vanguard; follow journalist Tim Pennington as he reaches a crossroads in his search for the truth; see how the crises on two colonies transform the lives of Diego Reyes and Rana Desai; and travel with Cervantes Quinn to a deadly confrontation that will change everything—all in one unforgettable Star Trek collection.

Operation Vanguard has risked countless lives and sacrificed entire worlds to unlock the secrets of the Shedai, an extinct alien civilization whose technology can shape the future of the galaxy. Now, Starfleet’s efforts have roused the vengeful Shedai from their aeons of slumber.

As the Taurus Reach erupts with violence, hundreds of light-years away, on “The Planet of Galactic Peace,” Ambassador Jetanien and his counterparts from the Klingon and Romulan empires struggle to avert war by any means necessary. But Jetanien discovers their mission may have been designed to fail all along…

Meanwhile, living in exile on an Orion ship is the one man who can help Starfleet find an ancient weapon that can stop the Shedai: Vanguard’s former commanding officer, Diego Reyes.

THE END OF THE EPIC SAGA BEGINS

In addition to the series itself, a few other stories have ties to Vanguard. They’re not essential reading in order to enjoy the series, but we’d be remiss if we didn’t mention them here:

2265: Following the discoveries made by the U.S.S. Constellation in the Taurus Reach, Starfleet has fast-tracked the construction of Starbase 47, a.k.a. Vanguard. But the rapid construction has meant concomitant technical problems, ones that are vexing Vanguard’s commanding officer, Commodore Diego Reyes.

So it’s the Corps of Engineers to the rescue. The U.S.S. Lovell, with its crack S.C.E. team led by Lieutenant Mahmud al-Khaled, must solve Vanguard’s technical crises so the base can become operational as planned.

Want a glimpse at what certain Vanguard characters and events might’ve been like in the Mirror Universe? Well, here you go.

The story features certain characters which appear in various Vanguard novels, as well as containing oblique references to events from the series’ earlier books.

The fourth of the original 4-book Star Trek: Typhon Pact mini-series and set more than a century after the events of Star Trek: Vanguard, this story features…uh…an element or two from the Vanguard series. Nothing big, though. Honest. No, really.

10 thoughts on “David Mack’s STORMING HEAVEN, and a Vanguard guide.”