Unless you’ve been freeze-dried or living on an asteroid for the past 30-odd years, you know that those are the first words to one of the most iconic opening credits sequences in the history of television.

When I was in single digits, The Six Million Dollar Man was the show to watch. Half the kids in my neighborhood — including me — were running around in slow-motion (only later incorporating that “dih-nih-nih-nih-nih” sound, when it became commonplace on the show). We had the big action figure with the hole in Steve Austin’s head you could look through and get “BionicVision” or whatever. I had Oscar Goldman and his exploding briefcase, and even Bigfoot with his bust-out chest panel. I may have had a lunchbox, but I don’t remember.

(It’s worth noting here that I still have all of the Martin Caidin Cyborg novels as well as the various novelizations from the TV show, along with those for The Bionic Woman. Nerdity is also free here at the Manor.)

Second only to the original Star Trek, The Six Million Dollar Man was my favorite show on TV back then. I watched Steve Austin go up against all sorts of bad guys, aliens, robots, death probes, and, yes, even Bigfoot. I remember my father coming home from work one evening and telling me there was going to be this new TV show about a guy who was sort of like Superman, but without the cape and costume. I also remember him telling me that the character was at least partially-based on a real incident involving a test pilot surviving a horrific crash. 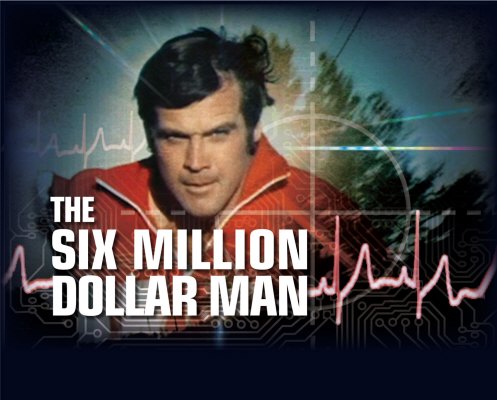 I don’t think the first episode I ever watched was the actual first episode, but I recall being a pretty regular viewer after that. In those days before DVRs and VCRs, if you missed an episode, that was the way it went until a rerun came along, but at that age I really didn’t care too much about stuff like that. The show started to fade from being “appointment television” during the fourth season (AKA “Season of the Mustache”), and I think I only watched a handful of fifth season episodes, as I’m sure I moved on to something else that I don’t even remember now. By the time the “reunion movies” started in the late 1980s, I’d left home and joined the service, and didn’t even know about them until I caught them by accident one afternoon on cable. The Sci-Fi Channel (excuse me, “Syfy”) aired the show for a while several years ago, but I only watched the occasional episode. Sometimes I got lucky and caught one that made me remember why I enjoyed the show in the first place. Other times? Well…not so much. That’s pretty much the way it goes so far as revisiting movies and TV you loved during childhood, right? Battlestar Galactica, Buck Rogers in the 25th Century and Ark II? I’m looking at you.

Anyway, skip ahead to March 2011, and my writing partner and hetero life mate, Kevin Dilmore, surprising me with an awesome gift: The Six Million Dollar Man – The Complete Collection DVD set.

For those of you who follow such things — this set is currently available exclusively from Time-Life, and will remain so until October 2011. It came out last fall, and the price tag made my eyes go all asplodey, though I did cave and pony up the money for the first season, which is also available by itself via Time-Life. I just about soiled myself when Kevin handed me the box set, after which he swore on a stack of Flying Spaghetti Monster hymnals that he did not pay the Time-Life price.

This thing is loaded! Once you get into the box itself (which has an embedded sound chip with the opening narration, and a lenticular picture on the top with Steve Austin running as he’s shown in the opening credits), the set is crammed full with DVDs containing the original three telefilms which preceded the series, all five seasons (including all “crossover” episodes with The Bionic Woman), the three reunion movies, and even the syndicated versions of the three pilot movies which were amped-up with extra footage to help pad them each to two hour-long episodes for the rerun package. Everything’s been cleaned up for DVD; the picture is crisp, the audio is clear, and it looks stupendous on my big-assed TV screen.

Each season comes in its own package, and each contains various featurettes and extras, which usually pertain to the individual season in question. Various episodes have commentary tracks, as well. New interviews with all of the major cast members and behind-the-scenes players are included throughout the seasons, including some great material featuring Harve Bennett and Kenneth Johnson. The sixth package contains the reunion movies, the syndicated versions of the three pilot films, and the really juicy extras including a brand-new 90-minute interview with Steve Austin himself, Lee Majors. All told, the extras come to something like 18 hours of material.

(And if you don’t believe what I said about the opening credits sequence, then you can learn all about its utter awesomeness in a 20-minute featurette devoted to its creation. I thought that sounded silly when I read it on the box, but it’s actually one of the coolest of the extras, which are already pretty cool to begin with.)

As for revisiting the series, I was surprised at how many episodes I couldn’t remember seeing…ever. Most of those were from the fourth and fifth seasons, but there were a few sprinkled here and there throughout the earlier years, as well. I’d seen the original pilot film in recent years, but never the other two (complete with Dusty Springfield opening credits song…youch). The very first episode of the actual series, “Population: Zero,” is still among my all-time favorites. The scene near the end when Steve breaks out of the freezer which has incapacitated his bionics, and slowly “ramps up” to full power and speed accompanied not by the familiar bionic sound effect but instead a simple heartbeat that increases in frequency with every passing second (along with Oliver Nelson’s superb music backing up everything), still kicks total ass.

Oh, and not for nothing, but Lee Majors still has the manliest running stride in the history of running men. Steven Seagal? You should be taking notes, dude.

Other favorites from throughout the run? Just from the short first season:

As for the rest of the series, I’m not going to list all the ones I like, love, or at least fondly remember, but suffice it to say that I had a good time burning through the set. Interestingly, I only howled with laughter at Steve’s 70s fashion choices once or twice, and my biggest note was about the pacing. I often found myself wondering how some of these episodes would play in today’s TV world, with almost 10 fewer minutes within an hour-long slot. In a lot of cases, it was easy to see where parts of scenes or entire scenes would be excised to fit the shorter running time, and the overall pacing of most episodes would be kicked up at least a couple of notches.

(And yeah, we know there are all sorts of problems with the basic concept of a “bionic man,” like how Steve Austin can lift a car without his bionic arm tearing away from his not-bionic shoulder, and so on. Hey, guess what? I don’t care. This is The Six Million Dollar Man, not the Science Channel, all right?)

Now, just to show that I’m not a hopeless gusher, I’ll point out that there are also more than a few episodes which were silly to begin with, and which have not aged well at all. Most of those involve Steve undercover for one reason or another…a magician, a boxer, a dock worker, a roller derby player, and so on. While the first Bigfoot episodes (the 2-part “The Secret of Bigfoot”) are fun, those follow-ups are increasingly goofy, as are the various “return of this or that robot” episodes. The fifth season has Steve being launched into space seemingly every other episode, but these are redeemed somewhat by the production’s having been able to film at Kennedy Space Center in and around various vehicles, buildings, simulators, and so on.

One side note so far as my overall enjoyment during my revisiting of the series is that both of my daughters got into the show, too. Addy absolutely digs “watching Steve Austin” and giggles hard enough to make me laugh when the opening credits spin up. Though I had to screen a few episodes to make sure they were kid-friendly, on the whole the series is something we can watch together, and doing so has been a total blast. I’ve also picked up the first season of The Bionic Woman for them to watch (and the second season is coming out in just a couple of weeks as I write this!), and we’ve been having fun with that, too.

Bottom line? The Complete Collection rocks, hard. If you’re a fan of The Six Million Dollar Man, this set is a must-have.

4 thoughts on “The Six Million Dollar Man – The Complete Collection.”