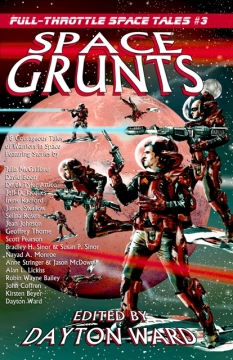 In the future, war is still Hell.

After you bomb your targets from the air, sea, or high orbit, someone has to go in and occupy the territory youve just claimed. They have to hump their gear in on their own backs, and they fight in all manner of inhospitable environments, from open space to the toxic atmosphere of alien worlds to the airless vacuum on the surface of a dead moon. You need someone who just does what has to be done, for as long as it takes to accomplish the mission.

You need the infantry. You need grunts.

Answer the call to arms! Join the brave men and women who march into battle, be it here on the Earth of tomorrow or on far-flung worlds. From the pages of history which has yet to be written come eighteen stories of duty, courage and strength in the face of bitter conflict — be it against our fellow humans or even life forms as yet unimagined.

See how future conflict is experienced from the newest recruit to the most war-weary general, not only by those caught in the heat of pitched battle but also those left behind. Visit near future Earth, where war is broadcast in real time with corporate sponsorship. Meet a mysterious entity that takes on the form of a dead soldier and brings with it a harsh message for humanity. Elsewhere, an alien race comes calling, interested in whatever resources it can take from Earth, and not at all worried about any resistance which might be offered by anyone already living there.

Do your part, and enlist today! Gear up and get on the ready line with the likes of Robin Wayne Bailey, Selina Rosen, James Swallow, Julie McGalliard and many more.

You've been warned. No whining.